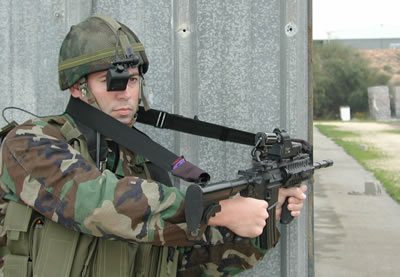 This trend has been implemented with infantry combat systems. Various soldier’s integrated systems are under development by Elbit Systems and ITL. Among such systems, on display at LIC-2005 are the AISS integrated combat system developed by ITL, the MPRS integrated, small-arms fire control sight system, and multi-purpose weapon system (Refaim MPRS) developed by IMI. This system has gone through extensive development and testing in the recent year, with three types of ammunition – enhanced direct attack weapon, utilizing proximity fused fragmentation grenade, a non-lethal grenade, and an observation grenade, which can be fired over the target area and transmit real-time images throughout its flight. A different system, developed by RAFAEL is the Firefly, a 145 gr. grenade designed to be launched from 40mm launchers (such as the M-203). The projectile is equipped with two CCD cameras. The video stream is transmitted in real-time to the operator in the field, viewed and recorded on a PocketPC or PDA console.

Future tactical observation systems pursued by the IDF will utilize the new miniature D-STAMP day and night payloads under development by Controp, as part of IDF/MOD development program. The fully stabilized payload weighs only 650 gr. D-STAMP is deployed with the Elbit System’s Skylark miniature UAV and is setting the baseline for future MAVs platforms considered by the IDF.