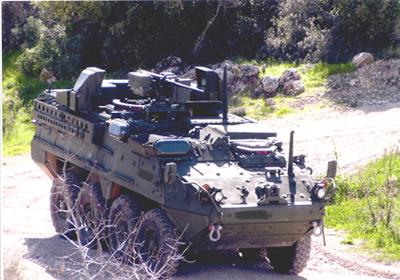 Other aspects of LIC are the modification and adaptation of vehicles, primarily armored vehicles, to cope with the threats posed by urban guerilla. A new system officially unveiled here for the first time is the Trophy Atcive Protection System, developed by RAFAEL (weapon system) and IAI/Elta (sensor). Trophy uses distributed sensors which detect and localize the incoming anti-tank missiles, RPG etc. When a threat is detected coming within range, the system fires an explosive countermeasure fragmentation charge which hits and destroys the threat before it reaches the protected vehicle.

Trophy is designed to equip armored fighting vehicles, and one of the first platforms which will be fitted on is the new Merkava Mk 4 main battle tank. It was demonstrated at the exhibition in two configurations. One was mounted as an integral element of a modified Merkava Mk 3 tank, while a lighter version was displayed as an add-on element, installed on a Stryker armored vehicle.

Elisra announced at LIC a new derivative of its PAWS IR missile warning system used on helicopters and aircraft. The new sensor designated TANDIR will be using a passive warning system for combat vehicles, an essential element for future lightweight active protection systems. As in the airborne installations, TANDIR will provide full hemispherical coverage enabling detection and tracking of multiple simultaneous threats. As an imaging IR sensor it will contribute to the platform’s situational awareness and threat assessment capability.

Protection of light vehicles is the specialty of Plasan Sasa. At LIC-2005 Plasan demonstrated two of its most recent designs, the armored MTVR, developed for Oshkosh for the US Marines, and a new version of up-armored communications version of the Humvee, developed for the Greek Army. 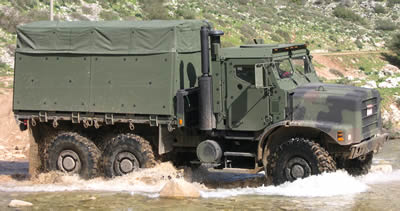