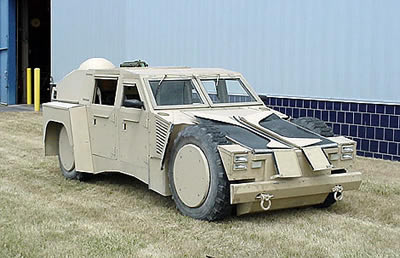 Under the Reconnaissance, Surveillance and Targeting Vehicle (RST-V) program, the Marine Corps, DARPA and the Office of Naval Research (ONR) demonstrated the capabilities of a prototype hybrid electric drive designed for recce missions. The vehicle, dubbed Shadow, is an advanced technology demonstrator 4×4 vehicles, which can be carried internally in the V 22 tilt-rotor, CH-53, CH-46 helicopters and C-130 transporters, providing quick deployment and deep insertion capability.

It was constructed with advanced materials to reduce weight and improve protection and survivability. Hybrid-electric propulsion system and advanced suspension is utilized to improve on-road and cross-country mobility. The vehicle is equipped with an RST mission package including navigation/geolocation capability, surveillance, reconnaissance and target acquisition systems, wireless and on-the-move satellite communications and advances situational awareness systems.

The Shadow is considered as a future successor to some of the M151 A2 fast attack vehicle and the AM General Humvee in USMC service. In fact, due to the spacious interiors derived from the distributed drive system, the Shadow has an internal space equal to that of the Humvee. Several configurations are planned for the Shadow, including reconnaissance, command, light strike, anti-armor, and mortar weapons carriers forward observer, forward air controller, battlefield ambulance, air defense weapon carrier, logistics and personnel carrier etc.

The basic vehicle is designed to carry a crew of four. The hull is constructed of aluminum, with optional use of armor kit protecting against small arms fire and mines. Bulletproof transparent windows are also optional. Main armament is a 7.62 or .50 caliber machine gun, or 40 mm automatic grenade launcher. Javelin missiles can be included in the vehicle’s combat load. The mission package consists of an a 3 meter high telescopic mast, equipped with electro-optical sensors and laser rangefinder for day/night observation.

The hybrid-electric drive is based on a front mounted Detroit Diesel DI-4V 2.5 liter turbocharged, intercooled diesel engine, rated at 114kW. The diesel powers an electrical 110kW generator feeding individual in-hub motors at each wheel. The in-hub motors are rated 50kW each. All electrical motors and generators are supplied by Magnet Motors. Backup power is provided by two rechargeable Li-Ion battery packs provided by SAFT. The batteries are rated at 20kW hours output with 80kW peak used in “bursts”. The Shadow can travel at a maximum speed of 112km per hour on road. At a speed of 50 km/h the vehicle will reach a range of 758km consuming 95 liters of fuel. Up to 32 km can be travelled on battery power only. The pneumatic suspension enables reduction of the vehicle’s height and width. At minimum ground clearance, the vehicle can “crawl” at a height of only 10 cm from the ground in acoustic and thermal “stealth” mode, driving silently on battery power with the diesel engine shut off. The height adjustment feature is useful to improve survivability and facilitate internal loading in air transports such as V22. When rapid acceleration or maximum torque is required for steep gradients, both diesel and electrical engines are operated to gain maximum power and torque. This mode is also used for rapid recharging of the batteries.

GDLS is currently upgrading the prototype vehicles to evaluate their use as utility carriers, prime movers and electrical generators for various applications. The upgrade will include a 30kW export power capability generated by the vehicle’s hybrid electric drive, which could power battlefield loads such as the Unit Operations Center and radars. The vehicle will be evaluated in an operational environment in early 2006. 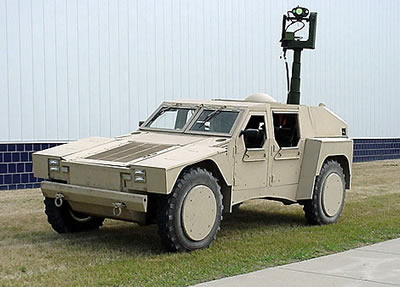