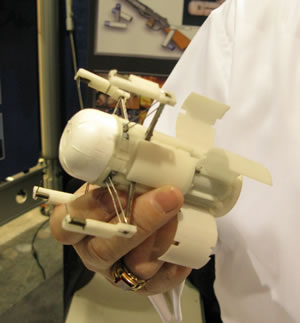 The patent-pending LEKTROX family of Wireless Electric Bullets is currently at the final stages of development before production. Each LEKTROX munition is fitted with built-in Wireless Electro-Muscular Disruption Technology (W-EMDT) that incapacitates the target instantly without causing serious injury or lethality. LEKTROX is promissing to provide supperior range and will be compatible with standard firearms, offering security and military forces non-lethal options currently unavailable with specialized weapons. R&D is being conducted in Israel by Elad Engineering Ltd. The developments was supported wireless and medical experts from Israel.


The weapon has been proved effective up to a range of 60 yards. The company expects that the LEKTROX 37/38mm and 40mm Wireless Electric Bullets will be ready in early 2007, with a 12-guage version available later in the year. LEXTOR is evolved from patented systems developed by Israeli-based Elad Engineering, and is supported by scientific and medical know-how.

When contact occurs, LEKTROX transfers kinetic energy to release its Multiple Mini-Harpoon mechanism and activate its built-in electrical system. These mini-harpoons fix the bullet irremovably to the target while it releases a W-EMDT charge that imitates the body’s own electro-neural impulses. Sending control signals to the muscles, a high voltage low current pulse safely overrides the target’s nervous system inducing a harmless muscle spasm that causes them to fall helplessly to the ground. To deliver enhanced target protection, the LEKTROX electric output has been designed in line with stringent medical equipment standards that protect patients from permanent injury, and operates at lower than critical cardio-fibrillation levels. Enabling full recovery with no clinical after effects, LEKTROX helps decreases liability for wrongful injury or death. Additional mechanisms and the use of collapsible materials further reduce the projectile’s kinetic energy.

SDI’s new ammunition incorporates a number of patent-pending W-EMDT and advanced engineering solutions, employed to ensure effectiveness and safety of the new ammunition against potential targets. According to SDI, LEKTROX ammunition remains safe during all stages of storage, transportation, handling and loading, by keeping it locked in safe mode until it is activated by contact with the target.

The LEKTROX ammunition is currently undergoing evaluation with military and law enforcement forces in the U.S. and elsewhere, anticipating a procurement decision in 2010.