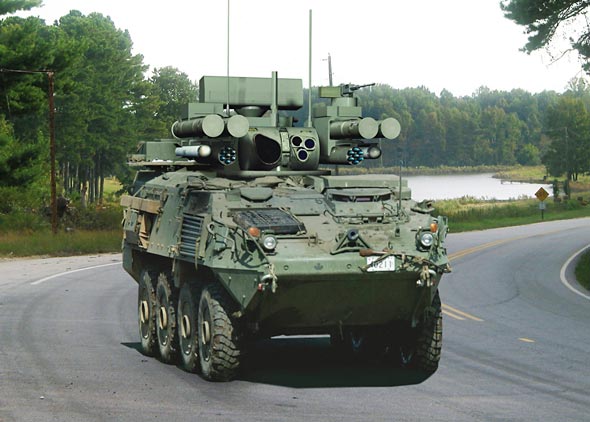 As part of the Canadian forces army transformation initiative, the new Direct Fire Squadrons will include Multi-Mission Effect Vehicles (MMEV) based on the modernized and upgraded ADATS anti-tank/air defense systems. The upgrades, to be carried out by Oerlikon Contraves will introduce non-line-of-sight engagement capability and range overmatch against ground and armor targets, improve operational capability within joint forces and coalition environment and improve Canadian point defense capabilities for the homeland protection and defense.

To convert from the tracked ADATS into MMEV, the turret will be updated and install on a new, air-transportable 8×8 wheeled Light Armored Vehicles (LAV) chassis built by General Dynamics land Systems. Fire units will be integrated with new 3D radar and EO/IR target acquisition systems, to better detect and track aerial and ground targets. These modifications will enable the system to engage targets at greater ranges and higher level of confidence, while minimizing the likelihood of fratricide and collateral damage. The system will retain its original ADATS missiles, but could also introduce NLOS missiles, such as a Spike ER. By collaborating with other direct fire elements, such as TOW Under Armor and Mobile Gun System, MMEV will be able to engage targets designated by other elements, including UAVs, while retaining its inherent air defense capability.