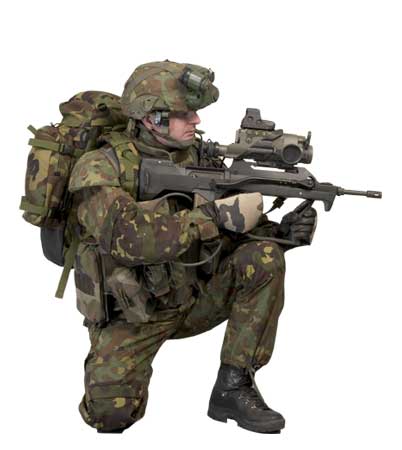 The FELIN warfighter’s clothing is fitted with a portable and robust digital communications and navigation system (radio/GPS). The unit’s network will utilize the RIF (Infantryman Information Network), a voice/data network utilizing the commercial DECT standard, offering voice, data, image, video and GPS positioning services. The network will connect each warfighter to other members of his section and, through his commander, to the SITEL (Elementary Terminal Information System) installed on the vehicle from which they disembarked.

Specialized sections and group leaders will also be equipped with a portable terminal information system for dismounted soldiers. The systems designated SIT COMDE, will function as an equivalent to the vehicle mounted SIT system, but this version will be optimized for operation on a compact personal computer. Integration into the SIT situational display and C4 networking will provide the dismounted infantry commander with tactical situation picture and exchange of encrypted information throughout the tactical levels of command, supporting exchange of map data, e-mail and symbols). 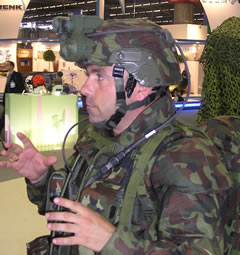 The “Portable Electronic Platform” uses a wearable computer powered by a high performance electrical energy source sustaining continuous 24 hours operation; both are integrated into the infantryman’s clothing, and forms the core of the system, including a computer and the fast open bus (USB 2.0 architecture) used with a communication and navigation assembly. The main application software is installed in the computer that controls the head and weapon electronic assembly, and also provides general control over the system. There are two wired networks in the clothing, one is the power transmission network, transferring electrical power to all systems and the other provides digital networking connectivity, carrying data, video, GPS and RF feeds to and from the radios and antennas. Target endurance times are of the order of 72 hours, by using Li-ion batteries and rapid recharge by a fuel cell specially developed at Sagem.