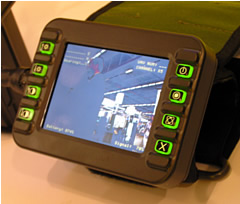 V-RAMBO is a man-portable, remote video terminal which receives TV broadcast quality live video and telemetry data, captured and transmitted by directly from aerial, surface and ground platforms. The compact system is comprised of a lightweight portable receiver, carried in a pocket or pouch, and a rugged, wrist-wearable display and control unit. The system can be coupled with PDAs, laptop PCs and goggles which can display standard video signals. Live video images provided by the Battlespace VideoNet (BVN) are used to establish an ad-hoc common language between units engaged in joint operations, such as Special Forces and air support.

By exchanging real-time target views through the Tactical Video Transmitter (TVT), verbal coordination and guidance can be minimized and better precision and situational picture can be delivered.

A new addition to the Rambo ensemble is the miniature Tactical Ruggedized Video Transmitter (TARGET), weighing only 140 gram, it can transmit video from a source (sniper’s weapon sight for example) to a distance of two kilometers, it is transmitting up to 0.5 watt, using analog, FM modulation, transmitted on the S band. (TARGET can be seen on the lower left side of the photo shown on the top of this page)