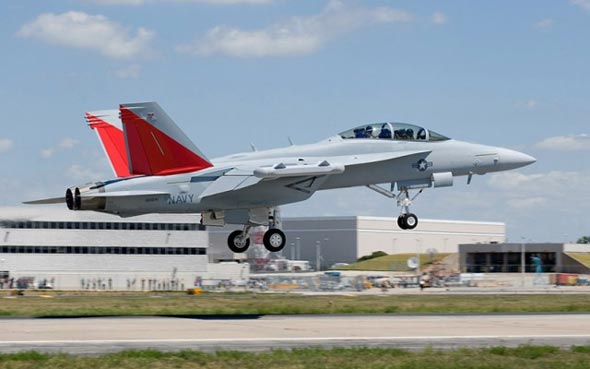 A derivative of the two-seat F/A-18F Super Hornet, the EA-18G’s highly flexible design enables warfighters to perform an array of AEA missions, operating from either the deck of an aircraft carrier or land-based airfields. The EA-18G will replace the Navy’s current aircraft carrier based AEA platform, the EA-6B Prowler, that has been in service since 1971. The first production Growler will join the Navy’s aircraft fleet in 2008.

The first EA-18G, known as aircraft EA-1, successfully completed its maiden flight from Lambert International Airport in St. Louis on
August 16, 2006. EA-1 is the first of two test aircraft built under a System Development and Demonstration (SDD) contract Boeing signed with the Navy on Dec. 29, 2003.The aircraft will fly to Naval Air Station Patuxent River, Md., later this year. In addition to flight testing, it will undergo extensive ground testing in the Patuxent River anechoic chamber to assess on-board radar, receiver and jammer compatibility and performance.