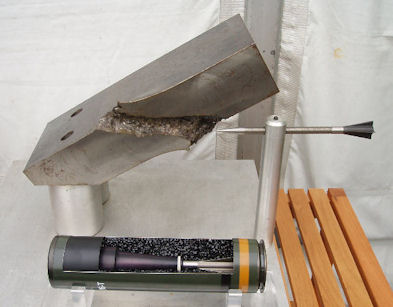 The electrically powered Case Telescopic Automatic Canon operates in a unique fashion packing maximum energy in a small space. With a length of 3.428 meter, the 40mmx255 caliber gun fires specially designed cartridges in a unique “Push Through” concept which extracts the projectile from the case into the chamber just before firing. The APFSDS-T cartridge can perforate 1500mm of steel at a range of 1,500m. Its muzzle velocity is 1,500m/s. The HE fragmentation (GPR-T) cartridge weighs 1 kg (of which 120gr are HE charge); it can be set to use either point detonation or time fuse for airburst effect.