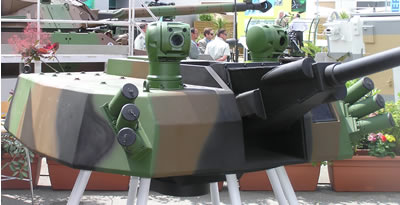 This design provides a low profile turret operating the automatic CTI 40mm cannon, firing telescopic ammunition. Since the unmanned turret is less vulnerable, its armor protection is aimed mainly to protect the sensitive systems and ammunition, from splinters, small arms fire etc. (level 3). This feature provides significant weight savings, resulting in a total weight of less than 1.5 tons. The turret has an internal ready-to-fire storage of 60 rounds of two types, and an integral remote controlled machine gun unit attached to the side of the turret, also equipped with ready to fire 1600 round belt.

Installation requires a ring with a diameter of 1 meter, compared to 1.4 meters required for the manned version used on the British Warrior. In the manned configuration, CTI 40mm turret is operated by a commander and gunner. Space is provided for 42 ready to fire rounds (two types), plus 110 in stowage. A conventional coaxial machine-gun is used, equipped with 800 rounds (plus 800 rounds for reload). The turret has level 4 protection and weighs around four tons. A different configuration proposed by CTI for the VBCI – blends the qualities of both types, with 70 ready to fire rounds (plus 120 in stowage), remote controlled side-mounted machine-gun and level 5 protection.