The AGM-88 HARM (high-speed anti-radiation missile) is an air-to-surface anti-radiation tactical missile designed to seek and destroy enemy radar-equipped air defense systems. The AGM-88 can detect, attack and destroy a target with minimum aircrew input. The proportional guidance system that homes in on enemy radar emissions has a fixed antenna and seeker head in the missile nose. A smokeless, solid-propellant, dual-thrust rocket motor propels the missile.

The supersonic missile uses a dual-thrust rocket motor, produced by Thiokol. Its launch weight is 800 pounds (360 kg). The missile has a range of over 30 miles (46 km). It is equipped with a radar seeker, and a proportional navigation system, enabling the missile to attack any active emitter within the predetermined area.

Once airborne, HARM can operate in three modes: preemptive, missile-as-sensor and self-protect. In long-range preemptive scenarios, HARM is fired before locking on to the threat radar. Targeting is provided through preflight planning or cued via on- or off-board sensors. Most aircraft are equipped to utilize HARM as a sensor, providing cockpit displays that enhance aircrew target selection and threat prosecution. Radar warning receivers used with the self-protect mode and other more sophisticated electronic warfare support measures (ESM) systems provide additional capabilities for locating enemy radar emitters. Once the aircrew selects the target, the missile is launched, homes in on the target, makes in-flight corrections and eliminates the threat.

In production since 1983, the missile was first used with U.S. Air Force F-4G Wild Weasel, supported by the APR-47 radar attack and warning system on the aircraft. The missile is operationally deployed throughout the Air Force and in full production as a joint U.S. Air Force-U.S. Navy project. The missile is cleared for operation with F-16, F/A-18, EA-6B and Tornado fighter aircraft.
An enhanced version of the missile is the “HDAM” (HARM Destruction of enemy air defense Attack Module). This version is equipped with GPS/INS system, improving the missile’s capability to pursue targets in electromagnetically cluttered environment, while coping with restrictive rules of engagement. HDAM uses the on-board GPS/IMU (fiber optic gyro) navigation system to restrict the missile’s seeker to pursue targets located in a pre-programmed missile impact zone (MIZ). The seeker will reject any target located outside the MIZ. If an emitter is shut down during the attack, or if the signal is lost during the flight, the HDAM will continue to search and will lock onto radars located in the MIZ as soon as they are activated. Provided with the new navigation system, HDAM can also be utilized as a long-range, supersonic strike weapon against non-radiating, time critical targets. The missile is also compatible with MIL-STD-1553 aircraft databus, providing pilots more flexibility in re-programming the missile in flight. HDAM is developed by Raytheon Company in the U.S. with support from Bodenseewerk Gerätetechnik GmBH (BGT) in Germany.

The missile’s performance were demonstrated in August 2006. It is scheduled to begin low rate production in 2007. 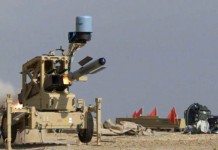