IEDs can be prepared almost everywhere, with materials that can be acquired from agricultural and medical supplies. The preparation does not require highly technical knowledge. In fact, many “IED engineers” practiced what they have learned through instructions they received from documents distributed by terrorist organizations, on CDROMs or over the internet. As they are not based on standard production formula, IEDs are more difficult to track and detect, (although they sometime have traces that can identify their origin). When constructed properly, IEDs can defeat even the highly protected threats, including main battle tanks and heavily armored bulldozers. Some IEDs utilize very heavy (200 pounds and more) explosive devices, buried below the surface of unpaved or paved roads, where they are covered, wait for activation by remote control. Such activation is usually dependent on opportunity. 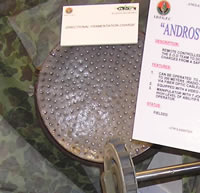 IED usually combined the effects of blast, fragmentation as well as armor penetration, through the use of shaped charge liners. Camouflaged explosives frequently serve as roadside bombs. These devices are remote controlled, triggered by infra-red, pressure bars or trip wires or remote control, when aimed to delay, or disrupt enemy forces in their movement into a secured area. These IEDs are aimed at the softer sides of unprotected vehicles and armored vehicles, and can be effective even from a distance of several meters. IEDs can also be grouped by “daisy chains” inflicting maximum damage on military patrols consisting of several vehicles. Using time delay activation, programmed to hit the rescue teams that rush to the scene is a frequent IED tactic. A common tactic aims at stopping the softer vehicle in a convoy or group, which can then be targeted by heavier charges employed by special teams covered by small arms fire, or RPG.

An IED scene is usually covered by a fire support team which will attack the target with small arms or RPGs, once the vehicles are stopped, or when the convoy or patrol disintegrate into individually, sometime isolated vehicles, such teams could try to assault the most vulnerable target, usually the one which suffered mobility kill, in an attempt to kill, or kidnap the crew.

Total protection of vehicles against IED is virtually impossible, due to the illusive nature of the threat. Attempts to overcome this deficiency frequently led to “overkill” solutions, resulting in creation of super heavy monsters, which by limiting their mobility, became even more vulnerable to heavier fire. The most effective countermeasures against IED is a balanced combination between physical protection and tactical conduct of operation. This becomes extremely difficult during prolonged peacekeeping security and stabilization operations under asymmetric warfare conditions, in which regular forces must quickly adapt their tactical drill procedures to unfamiliar combat situations. Troops operating in such high-risk environment must be able to improvise their tactics to counter the evolving threats facing them.

Experienced guerilla attacks try to target the weakest vehicle in the convoy. To counter this, it is imperative to protect the critical mobility elements, allowing rapid reaction dash-ot of the danger zone, before the convoy stalls in the fire beaten zone. High priority protection therefore will focus on the engine, running gear, cabin and installation of ‘run-flat’ tires.