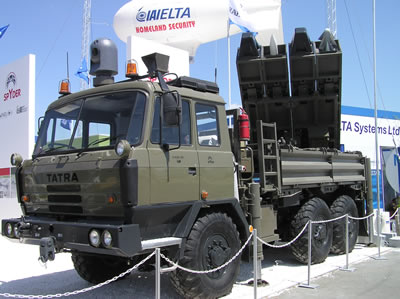 Both missile systems are offering Lock-on Before Launch (LOBL) and Lock-on After Launch (LOAL) modes, for faster response time and improved engagement flexibility. The system can effectively defeat all modern aerial threats including aircraft, helicopters, cruise missiles, UAVs and precision guided weapons. It uses two operational missiles which complement each other in their target detection, tracking and pursuit profile – the Python 5 missile is equipped with a dual waveband Imaging IR (IIR) seeker, while Derby is fitted with an active RF seeker, both missiles are highly immune to advanced countermeasures.

SPYDER firing unit deploys four missiles stored in ready-to-fire launcher-containers, installed on a high mobility vehicle, this configuration enables simultaneous engagement of multi-targets and ripple firing capability. A SPYDER system supports up to six firing units, missile reloaders and Command and Control Unit which can also accommodate the Elta EL/M-2106NG ATAR 3D surveillance radar and two operating consoles. The surveillance radar can simultaneously track and engage up to 60 targets, at a range beyond 35km (depending on the terrain). The control unit interfaces with the firing units via wireless datalink to enable optimal unit dispersion for effective area coverage, mutual protection and survivability. The system’s high mobility offers quick deployment and operational agility. The system has VHF/HF communication for internal squadron communication and to upper tier command.

A typical SPYDER Squadron consists of one Mobile Command & Control Unit (CCU) for its operation and four Mobile Firing Units (MFU). The CCU is equipped with surveillance radar and two operator’s stations. Each MFU can carry up to four ready-to-fire missiles (RF or IIR) in any combination. The CCU controls the MFUs and supplies them with engagement data. The missiles can be fired either from the CCU in remote mode or from the CCU with the confirmation of the MFU operator.

By using the latest Air Situation Picture (ASP), which is available by the local surveillance radar, the CCU assigns the targets for destruction to the appropriate MFU. The CCU system is built in an open architecture design and can receive data from upper tier Command & Control from a distance of up to 100km. In addition, there is a provision for receiving Air Situation Pictures communicated by other agencies.

September 2006: The Indian Army is all set to acquire the Israeli quick-reaction Spyder air defense system, developed by RAFAEL, which would enhance the capability to overcome the vulnerability of its formations to threats from the air. According to India Defence online magazine, the army has finalized plans to acquire four regiments of the Spyder systems, equipped with Derby surface-to-air radar guided missiles and Python-5 infra-red missiles as part of a contract worth over US$250 million (Rs 1,100, crore) awaiting the approval of the Cabinet Committee on Security (CCS). The new systems will replace the army’s Russian-made OSA-AKM and Strela-10M missile systems. The system has been proposed and is being evaluated by the Israel Air Force, as a future replacement of the Vulcan, Chaparral air defense systems. A Medium Range version of the system (Spyder MR) is also under development, and proposed to several international customers. 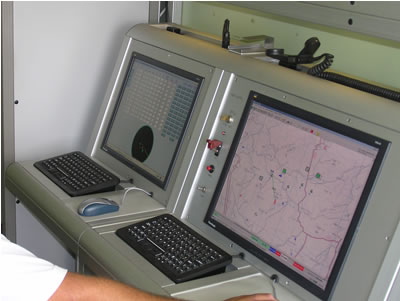