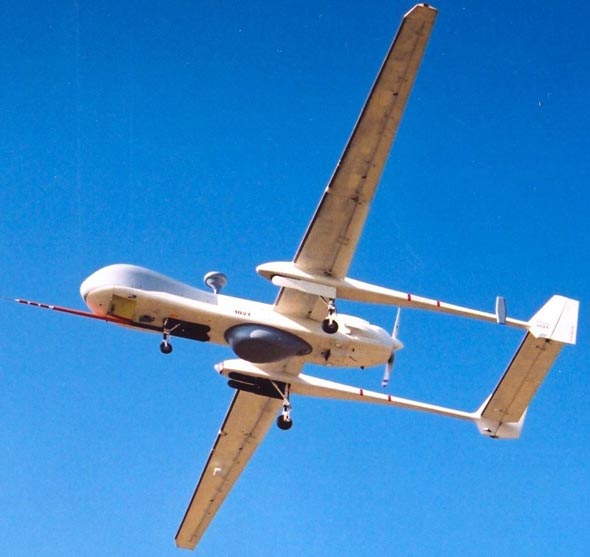 The EAGLE Système Intérimaire de Drone Male (SDIM) UAV system has been developed by EADS, in order to meet European requirements for strategic reconnaissance and surveillance, in support of out-of area operations. Two versions are planned – Eagle 1, powered by a 115 hp Rotax 914 engine which can fly at 25,000′ and the Eagle 2 turboprop powered version (1200 hp PT6A engine), designed for 24 hours operation at 45,000′. Fully integrated into modern NATO C4I infrastructures, EAGLE will become a major asset in future network centric operations of the French army. It is also expected to be fielded with other NATO members.

Eagle was selected by the French Air Force, to provide strategic and theater reconnaissance, intelligence collection and communications support. It is also expected to operate in the maritime surveillance and anti-surface warfare role. As a European program, Eagle is expected to compete on other MALE oriented NATO programs, to become an integral part of NATO’s C4ISR and Intelligence, Surveillance, Target Acquisition and Reconnaissance (ISTAR) capabilities. The UAV will have a secondary role in support of surveillance of maritime traffic, and support of homeland security, search and rescue missions and support operations over coastal regions. The aircraft is designed to meet airworthiness criteria and operate in military and civil airspace, ensuring flight safety at every phase of the mission. The aircraft can be deployed from airstrips with runways as short as 600 meters (eagle 1) and 1,000 m’ (Eagle 2).

The SDIM drone flew from the DGA flight test centre at Isrers on Sept. 11, 2006 fitted with full communication package including satellite communication and line-of-sight data links. The flight, operated from the operational SIDM ground station, demonstrated the integrity of the UAV system, in particular the Automatic Take-Off and Landing (ATOL), satellite communication and the integral command and control functions. Further flights from Istres are planned to allow the customer to verify the system performance in the coming few months prior to final training of the French Air Force operators.

SDIM is designed for carrying out surveillance, reconnaissance and intelligence and target acquisition missions over long distance, by day and night as well as in all weather conditions with integrated anti icing system. SIDM is designed to be employed as an independent ISTAR system or as a key component of a full C4ISR system. With total payload carrying capacity of 1,250 kg, SDI can carry multiple payloads at a total weight of 250kg. With a wing span of 16.6 meters, the drone can carry out missions at a range exceeding 1,000 km from its point of departure. It can cruise at a maximum ceiling of 30,000 feet and remain airborne for more than 24 hours.

The Eagle program will be comprised of two versions of air vehicles; the Eagle 1 utilizes an IAI Heron, modified to meet European and particularly French Air Force requirements. One of the most visible elements is the introduction of the satellite link, in the upper forward section. Addition of deicing system, at the wing leading edge enables the Eagle to safely fly through icing conditions. Eagle 2 is under development under a joint EADS/IAI program, believed to be based on IAI’s Heron TP program (Designed for the Israel Air Force Eitan MALE program). Both vehicles are fully autonomous throughout the mission, including the automatic takeoff and landing phases. The vehicle is designed to carry multiple payloads, and perform multiple missions, such as COMINT, SIGINT and IMINT or SAR, IMINT and communications relay etc. Eagle can carry several types of sensors, including maritime patrol radar (MPR), different types of SAR/MTI, EO/IR payloads, SIGINT, COMINT, laser designator, communications relays etc.

September 11, 2006: The Système Intérimaire de Drone Male (SDIM) unmanned aerial system made its first flight from Istres air base flight test center in Southern France. A Medium Altitude Long Endurance (MALE) Unmanned Aerial Vehicle (UAV) System, SDIM program is led by the French armaments procurement agency (DGA) and is developed under cooperation between EADS and IAI/MALAT. When fully developed, SDIM will be deployed by the French Air Force as a strategic ISR asset.