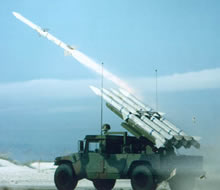 SLAMRAAM also known as Complementary Low Altitude Weapon System (CLAWS) offers effective defense against the low-flying cruise missile and the unmanned aerial vehicle. The system is already deployed with the Norwegian army, the Spanish army and has recently been acquired for the US Army and marine Corps. The system concluded the developmental testing phase in January 2005.

SLAMRAAM can also integrate with other assets, such as Hawk, Patriot or sea based Aegis units, to provide an effective protection against all types of delivery means, from ballistic missiles, cruise missiles, asymmetric aerial threats and unmanned aerial vehicles.The system utilizes distributed architecture, for improved survivability and support of multiple, simultaneous engagements, the Surface Launched – (SL) AMRAAM provides close range as well as Beyond Visual Range intercept capability under all weather conditions, day and night. AMRAAM can effectively engage cluster targets, and employs an all aspect look-down seeker to overcome difficult topography.

In 2004, contracts were awarded to Raytheon to supply SLAMRAAMs to the U.S. Army and U.S. Marine Corps. The system configuration uses common elements, comprising of the missile launcher, mounted on a Hummer; a new Integrated Fire Control Station (IFCS) which will be netted to the Sentinel radar; the Army’s future Joint Land Attack Cruise Missile Defense Elevated Netted Sensor system (JLENS) and the Marine Corps’ future Multi-Role Radar System. The new missiles will increases the number of firing channels per battery, and introduce an effective defense against cruise missile threat. 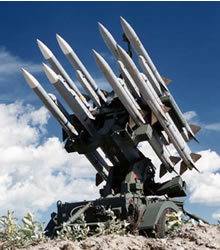 The standard missile launcher operated by the Norwegian army, carry six AMRAAM missiles protected in a containers. A universal launcher carries six AMRAAM missiles, or three HAWKs. It is also equipped with a datalink which communicates with the missiles on during their flight, with mid-course target updates. The mobile Hummer launcher carries four to six missiles. A mobile version utilizes a six missiles launcher, carried on a light tactical vehicle such as the Hummer. A firing unit is also equipped with the AN/MPQ-64 Sentinel radar and Fire Distribution Center (FDC).

In October 2006 Raytheon announced the completion the development of software upgrades for the ground launched AMRAAM missile system, demonstrated the system in test firing conducted in partnership with the Spanish Army and the U.S. Air Force. Among the new capabilities added to the system are command destruct/self destruct (CD/SD) capabilities, improving the missile’s capability of intercepting cruise missiles and other unmanned targets, over urban terrain. The CD/SD capability provides greater flexibility in the employment of Surface Launched AMRAAM (SL-AMRAAM) while engaging cruise missile and unmanned aerial vehicle threats. The capability helps mitigate collateral damage when used in a surface launch role within an urban environment. Additionally, CD/SD software provides the capability of a programmable self-destruct to help reduce fratricide. These successful tests concluded more than 24 months of work on the Software Upgrade Program 2006 for AMRAAM.

Since May 2006 Raytheon demonstrated the missile’s accuracy with seven direct hits, during tests conducted with the Norwegian Air Force. A more recent test, in association with the Spanish Army and US Air Force, was conducted in Sweden in October, where three missiles scored direct and instrumented hits, demonstrating the new command destruct/self destruct capability (CD/SD).

The US Army is evaluating further roles for the SLAMRAAM, including the use of an AMRAAM derivative for missile defense. The Multi-service Extended Range Low-cost Interceptor (MERLIN), could use a dual-stage boosted missile designed to intercept and destroy unsophisticated cruise missiles and unmanned aerial vehicles (UAV). Used as a low-cost, shorter range complement to the AMRAAM missiles, which will be saved for more difficult targets. Other missiles to be evaluated for this role include the single-stage Low Cost Interceptor (LCI), which is being developed as a low-cost complement to the Patriot missile.

On May 26, 2006 Raytheon and Boeing announced the first delivery of an Integrated Fire Control Station (IFCS) for the U.S. Army. Boeing is under contract through 2007 to design and develop the system’s IFCS. The IFCS is the first of five to be designed and developed by subcontractor Boeing. The program  will now move to integration at Raytheon’s, to be followed by flight testing of the integrated system.

In addition to its primary mission as control center for teh SLAMRAAM, the IFCS can be networked to the U.S. Army’s Sentinel radar, the Army’s future Joint Land Attack Cruise Missile Defense Elevated Netted Sensor system under development by Raytheon, the existing Patriot radar and the Marine Corps’ future multi-role Ground/Air Task Oriented radar system to provide truly integrated fire control for the air defense battlespace.