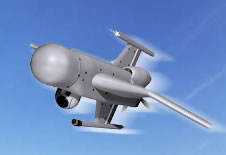 TARES attack drone is based on the Taifun attack UAV. Unlike its predecessor, which operated autonomously, the new UAV is designed to facilitate “man in the loop” operation.  TARES will provide IIR and radar images and automatic target identification capabilities. When high priority targets are detected, TARES will be able to switch mode and attack them. The drone will have a range of 200 km and flight endurance of four hours. Operating several UAVs over the area of operation, TARES will be able to deliver images and sensor data over a range of up to 600 km, using automatic relay systems. also have the  searches and engages high priority targets as instructed by the operator.