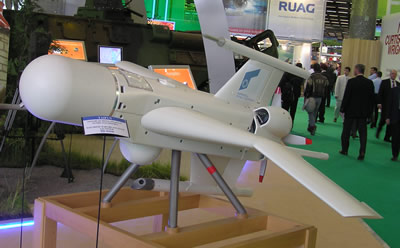 Taifun attack drone based on the KZO recce UAV searches and engages high priority targets. It destroys its target with a hollow-charge warhead. Taifun is powered by piston-engines with a pusher propeller. A cross-wing design configuration enables the drone to dive at a steep angle when attacking ground targets. The aerial vehicle itself is designed with stealth materials to reduce its signature, attenuate engine sound and reduce the exhaust’s thermal signature. Taifun is equipped with a UHF jam-resistant, frequency hopping datalink and relay which extend its operation up to 200km. An advanced version of the Taifun, designated TARES is in development.

Taifun is fitted with Ka band millimeter-wave radar seeker, which uses Doppler beam sharpening (DBS) for target acquisition and monopulse tracking during the final phase of the attack. An infrared sensor operating in the 3-5 band is providing snapshot target verification, just prior to the attack maintaining positive “man in the loop” control for target selection, identification and supervision of target approach. Taifun attack can be interrupted until the final five seconds before impact. When interrupted, the UAV is available for another mission. Taifun is designed to autonomously navigate over any terrain, using inertial, GPS and terrain matching navigation techniques. The attack drone can be employed in several modes of operation, including target search and attack in a designated area, dedicated geographical spot or attacking moving targets along designated routes.