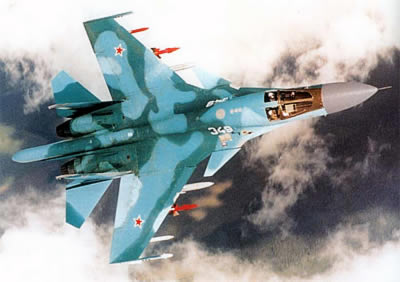 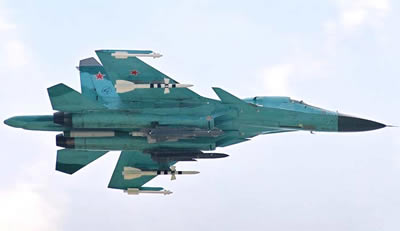 The Sukhoi SU-34 (Fullback) is developed to address a Russian Air Force requirement to augment and replace SU-24/24B Fencer. Designed for supersonic penetration of enemy airspace at treetop level, SU-34 can carry eight tons of ordnance, and strike from a standoff range of 250km. Fitted with an armored cockpit, advanced countermeasures and effective standoff weapons, it will be able to survive missile’s fragments as well as direct hits from small caliber weapons. With external drop tanks, the aircraft has a combat radius of 1,500km, which can be extended by additional drop tanks or aerial refueling. At a gross takeoff weight of 45.1 tons, SU-34 can carry eight tons of external loads, including subsonic and supersonic air/ground missiles and unpowered weapons.

It is equipped with a digital weapon delivery system enabling high precision weapon delivery (accuracy within few meters) at all weather conditions. The aircraft is designed to penetrate enemy airspace at tree-top level using terrain Contour Matching (TERCOM) capability, flying at 1,400 km/h. SU-34 has a top speed of Mach 1.8, slower than teh SU-30MKI Flanker. It is powered by two Salyut AL-31FM1 engines generating 13.5 tons of thrust. 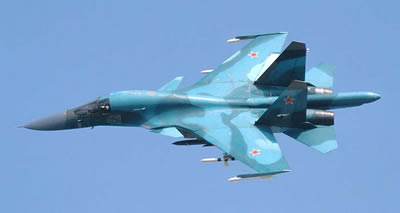 Michail Simonov, chief designer of the aircraft, the sturdy, maneuverable and armored Su-34 resembled a flying tank. The aircraft has a spacious, armored cockpit, protected by 17mm steel cage shielding the crew and avionics from bullets and shrapnel. It is designed to comfortably seat the pilot and navigator side by side. the pilot or the navigator/systems operator can stand up and stretch their muscles or even take a nap in the aisle (while the plane is on autopilot or is steered by one man). They can even eat borsch from a vacuum flask or microwave meat. The plane also has toilet.

The aircraft design, highlighted by the horizontal empennage, visible behind the cockpit ensures in-flight stability and reduces buffeting at low altitude. It is designed to have a small radar cross section, which, according to simonov, is equivalent to that of a supersonic cruise missile.

The aircraft made its maiden flight in 1990 (called SU-27IB). According to Simonov, the prototype was not designed for such levels of comfort. “a prototype Su-27UB commanded by Nikolai Sadovnikov had completed an experimental flight from Moscow to the Okhotsk Sea and back during tests. The plane spent 16 hours in the air and refueled four times from air-force tankers. “All systems functioned without a hitch, but the gray-faced pilots looked very tired after they climbed out of the cramped cockpit. They did not look capable of engaging the enemy after such a long haul.” said Simonov.

According to Simonov the extended range and crew comfort are of critical importance in Russia, as it usually takes a warplane in the Russian Far East seven days to reach Tajikistan because intermediate airfields are often closed due to bad weather, fuel is not delivered promptly and pilots do not have enough time to rest. But the crew-friendly Su-34 has eliminated all these problems.

The engines are designed for 1,000 operational hours between repairs. Unlike many of its counterparts, the Su-34 is not yet offered on the international market.

2013 Update: The Air Force is due to get a total of 124 Su-34s by 2020 under two contracts with the Sukhoi holding. According to official data, 29 series-production Su-34s have been delivered to the Russian military so far. The aircraft will eventually replace all of the ageing Su-24 Fencer strike aircraft in service with the Air Force and the Navy. When the first Su-34 was delivered the Russian Air Force was operating 10 air regiments flying SU-24, which are considered to convert to SU-34 in the future.

In 2013 the the Defense Ministry confirmed the Sukhoi aircraft maker is expected to deliver a total of 30 Su-34 Fullback strike aircraft to the Russian Air Force by the end of 2014. “The current [2013] year plan on the delivery of 14 [Su-34] aircraft under the state defense order will be fulfilled, and the plant has promised to deliver another 16 fighter-bombers next year,” the ministry said in a statement in October 11, 2013,  citing a report by the Novosibirsk plant.