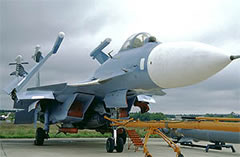 The single-seat, twin-engine Su-33 (also known as SU-27K) is the naval variant of the Su-27 Flanker fighter aircraft. Developed in the early 1980s for operating from the Soviet navy’s aircraft carriers, the Su-33 uses folding wings and uses an additional pair of canards to improve control at very low speed (useful for maneuverability, as well as for takeoff and on landing approach). China currently operates two variants of the Su-27 fighter family in its air force and navy: the Su-27SK/UBK fighter and the Su-30MKK fighter-bomber. The Su-33 would become the third variant of the family to be serving with the Chinese armed force.

Russia and China are finalizing negotiations for the delivery of up to 50 Su-33 carrier based jet fighters, at a cost of US$2.5 billion. China is expected to get two Su-33 jets to be used for evaluation and operational trials on the on the ex-Soviet carrier Varyag China acquired from the Ukraine in 1999. The carrier is currently stationed at China’s Dalian Shipyard, being refitting since 2002. Once commissioned to service, the carrier will be able to operate the 12 aircraft of SU-33, which are included as the first option part of the current program. Eventually China could buy up to 50 aircraft of this type, to equip the first indigenous Chinese built aircraft carrier expected by 2010.(see original coverage at Sinodefence.com)