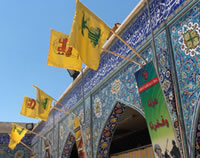 Two years of diplomatic and economic isolation don’t seem to have tarnished Syria President Bashar Assad’s shine. The Baker plan, with its request that the White House revise its politics in the Middle East , has brought him back to the center of the international stage. The emergence of a Shia-dominated government in Iraq has raised the possibility for a wider Shiite linkup with Iran and Syria where the Alawite Shia minority dominate the Sunni majority and Nasrallah’s political upsurge in Lebanon, following Hezbollah’s ostensible showing during last summer’s war with Israel.

Experts on the Arab world disagree on Syria’s part in Iran’s regional ambitions. Some say the so-called “Shiite crescent,” which presumably includes Lebanon, Syria, Iraq, and Iran, is being overblown. First, the claim states, that Syria is not Shiite but Alawite, a secular sect of Islam that ascribes to Arab nationalism, rather on its religious heritage, which puts it at odds with Shiite regional Islamic interests. On the other hand, in their mountainous corner of Syria, the Alawis claim to represent the furthest extension of “Twelver Shi’ism”.

Numbering perhaps only a million persons—about 12 percent of Syria’s population the Alawites derive from a schism in the 9th century around the 11th imam, al-Askari, who they consider the last legitimate descendant of the Prophet Mohammed.

The origin of the Alawite sect still raises essential questions about religious authority and orthodoxy in contemporary Twelver Shi’ism. But this does not seem to prevent its fullest relationship with revolutionary Iran, including its Shiite clerigal regime.While the old controversy over the origins of the Alawis may be forgotten, the contemporary Alawi enigma is this: By whose authority, and in whose eyes, are the Alawis counted as Twelver Shi’ites? An important visible sign of Alawi esoterism was the absence of mosques from Alawi regions. But The Sayyida Zainab Shrine, in downtown Damascus, where granddaughter of the Prophet Mohammad is buried, has recently gained new reverence to Shiite pilgrims.

Sunni heresiographers excoriated Alawi beliefs and viewed the Alawis as disbelievers (kuffar) and idolators (mushrikun). What was needed was some form of recognition from a Twelver Shi’ite authority, who could buttress the Alawis’ own problematic claim that they were indeed Twelver Shi’ites. The solution appeared in the person of the late Imam Musa al-Sadr, Iranian-born head of the Shiite Supreme Council in Lebanon, who became a “confidant, political ally, and friend” of then-Syrian President Hafez Assad in the early 1970s. In a covenant which was sealed in a Tripoli hotel in July 1973, Musa al-Sadr issued a fatwa declaring Alawites to be part of the Shiite Muslim community, helping Assad weather a political crisis over the Syrian constitution’s requirement that the president be a Muslim and boost his legitimacy among a Sunni majority population accustomed to thinking of Alawites as heretics. Arabist scholars consider that Sadr’s fatwa may well have encouraged Hafez Assad’s brutal crack down on his Sunni opponents in the notorious 1982 Hama riots. However, the shrewd Hafez, “Lion of Damascus” carefully balanced his sensitive relations with clerical Iran during his iron rule, keeping its within limits of mutual convenience.

As result of latest developments in the region, in which fundamentalist extremist elements are on the rise to new power bases, an emerging “Shiite bloc” of Iran, southern Iraq, Alawite-ruled Syria, and Lebanese Hezbollah is being envisioned by Tehran’s Ayathollahs. Sofar Mid East experts assumed, that Assad’s Alawite minority, which faces decades of Sunni mistrust, would hesitate to throw in Syria’s lot with a Shiite Iran, but Bashar Assad, clearly lacking his father’s faculties of political wisdom, has changed some of Syria’s fundanemtal strategic policies, which, on the long run may have serious consequence to his country.

There are already many mutterings within Syria that the current President’s father, the shrewd and forceful leader Hafez, would have never let matters get to this stage – with Syria condemned not only as a rogue state, because of its alleged killing of Rafik Hariri, but having been coerced to withdraw its troops from the Lebanon, its lucrative economic backyard, after a 30-year occupation. As its seems, Bashar Assad is fully committed to Iran’s Mahmoud Ahmadinejad’s growing patronage. Intelligence reports indicate that the Iranian Revolutionary Guard Corps (IRGC) or Pasdaran, is busy building its power base in the outskirts of Syria’s capital Damascus. Accordingly, an extensive communications center is being constructed within the compound of Syria’s Presidential Guard at Almaza, its commander being the president’s younger brother Maher. Unconfirmed reports mentioned, that from this very center, operations were conducted during the Hezbollah war in summer 2006.

The questions asked these days are: Can the ” Sunni moderate axis” ( Saudi Arabia- Jordan and Egypt) still sever the Syrian “missing chain” to Ahmadinejad’s ambitious “Shiite Crescent”? Unfortunately, there seems to be little hope for that.

There is no doubt that Sunni Arab governments are trying to pry Syria out of its alliance with Iran, before its is too late, but sofar very little has been done to implement this wish. Meanwhile the Bush Administration has been quietly nurturing individuals and parties opposed to the Syrian government in an effort to undermine the regime of President Bashar Assad anti-Assad groups in Washington, Europe and inside Syria mechanisms of democratic change in Syria National Salvation Front affiliated to the Muslim Brotherhood. Soberly considering Syria’s internal conditions, Middle East experts assess these efforts rather futile. The Syrian security forces are very effective in ferreting any opposition leaders out and hunt these down ruthlessly.

The Sunni majority tolerates the Alawite minority regime for one simple reason: they don’t want another Lebanon in Syria because they know there will be blood in the streets and the Alawites will fight to the last man. They are willing to wait. A future palace coup is only likely if the Alawites can be convinced that Bashar is in fact endangering their survival as the rulers of Syria and even perhaps as a community. Sofar this seems far fetched wishful thinking- as Bashar has even weathered the forced ousting from Lebanon following the 2005 “Cedar Revolution”.

As has been repeatedly demonstrated in this region, any American-orchestrated attempt to conduct in regime change proved a waste of effort only due to fail. Syria’s opposition is so fractured and weak that there is little to be gained by such a venture. Even young Assad, has managed to consolidate his power by moving allies into critical positions and demoting those considered threats—including the veteran Abdel Halim Khaddam, a former vice president and one of the few Sunnis in Syria’s top positions who was driven into foreign exile.

However there are some indications that Sunni leaders are waking up to the ongoing emergency on their very doorstep. Saudi king Abdullah II recently met with Syrian opposition leaders – Sheikh Ali al-Bayanoni, the banished head of Syria’s Muslim Brotherhood currently residing in Belgium, and Bashar’s uncle, Rifat Assad and Abdel Halim Khaddam. Whether such meetings will become a new Sunni strategy remains highly questionable. Certainly, Syria, Lebanon and Iraq are crucial protagonists in the specter of a Shi’ite crescent, according to the Saudi royal family, King Abdullah of Jordan and conservative American think tanks, however the facts on the ground are much more complex than a simplistic formula to solve this dilemma.

In sum, it seems that Bashar Assad has chosen to gamble. He hopes that defiance of Washington will strengthen his position at home and that, after George W. Bush leaves office, U.S. policy toward Syria will soften. Should his gamble succeed, he could emerge more influential. Should it fail, he may lose his regime. His latest move to align his strategy to Moscow’s new ventures in the region and even his sofar dubious signals toward Israel, may indicate that young Bashar has, after all, more on his pallet than a London Ophthalmologist’s certificate.