Initially led by Sheikh Sharif Ahmed Muhammad, the Islamic Courts Union (Midowga Maxkamadaha Islaamiga), a loosely-organized body of 11 autonomous courts in the capital, Mogadishu, wants to implement Sunni Shari’a in the entire country. Another key figure in the ICU is Sheikh Hassan Dahir Aweys, the leader of al-Ittihad al-Islamiya, an Islamist movement that has been around since the 1970s, pushing for the implementation of strict Shari’a across the entire Horn of Africa. Aweys has admitted meeting with al-Qaeda leaders and is wanted by the United States for involvement with al-Qaeda killing 18 US Army Rangers ( “Blackhawk Down”) during the failed United Nations intervention in Somalia in 1992. In fact, Middle East intelligence sources claim that the Islamist group has already firm ties affiliated to Al Qaeda. On June 30, Osama bin Laden released a tape calling on Muslims to support the Islamic courts and to open a third front in the war against the United States in Somalia. It is now feared, that the conflict in Somalia could engulf the entire Horn of Africa region, as Islamic Courts leaders have repeatedly claimed, that they want to incorporate ethnic Somalis living in eastern Ethiopia, northeastern Kenya and Djibouti into a Greater Somalia.

The Horn of Africa – including Djibouti, Eritrea, Ethiopia, Kenya, Somalia, is a region of strategic importance. Due to its strategic location, it has been used to restrict access to the Red Sea in past conflicts. But in recent decades the Horn of Africa has also been a region continuously in crisis.

Ethiopia, a nominally Christian country surrounded by Muslim states – Sudan, Somalia, Eritrea and Djibouti – has expressed grave reservations at the emergence of another Islamist state next door. They have kept a very close watch on events in Somalia- especially the recent appearance of al Qaeda elements backed by Iran.

Somalia and Ethiopia share a long border – over 1,600 km. – and relations between the two countries have always been turbulent. Somalia lost a bloody war over Ethiopia’s Somali-populated Ogaden region in 1977-1978. The war was initiated by General Mohamed Siad Barre in an attempt to create a Greater Somalia. Ethiopia considers the Ogaden as the corridor to its sole outlet to the sea at the big port of Djibouti, a highly strategic location, astride the point where the Indian Ocean converges with the Gulf of Aden, the Persian Gulf and the Red Sea. Experts fear, that large-scale war escalating in Somalia involving Ethiopia would, in all likelihood, drag in further African nations into a regional conflict-backed by al Qaeda, which is seeking new venues for its global terrorist activities.

Some major Middle East players and primarily Iran, are taking a new look at the strategic Horn of Africa and lawless Somalia seems to be the ideal place for Tehran’s regional ambitions. Iran’s interest in the Indian Ocean region have been confirmed already with the International Conference on the Indian Ocean community, held in Teheran in mid-November 1996. Recently these interest received new impetus, when Iran and Djibouti discussed avenues for bolstering bilateral relations and issues of mutual concern. Djibouti’s President Ismail Omar Guelleh, who arrived here last September for a three-day visit in Tehran at the head of a high-ranking politico-economic delegation, met with Iranian Foreign Minister Manouchehr Mottaki.

Tehran is already busy in providing secret support for the Islamic Courts Union.Besides the possibility of gaining access to uranium deposits in Somalia, influence in Somalia gives Iran a foothold on the strategic Horn of Africa. This, combined with Iran’s dominant position on the Staits of Hormuz, gives Iran leverage over two crucial shipping channels. Somalia is already a haven for piracy, and with professional help, this piracy could become a major international problem.

A United Nations monitoring group has stated that Iran has recently provided at least three consignments of arms. In a detailed report, Tehran has supplied a consignment including 1,000 machine guns, 45 surface-to-air missiles, M-79 rocket launchers and land mines. One particular shipment of arms arrived at the Baledogle airport and was met by no less than the ICU head of the security affairs,Yusuf Mohammed Siyyad and the chairman of the Dayniile court Sheikh Hussein Janaqow.

But Iran seems much more interested in obtaining access to Somalia’s U238 Uranium ore. According to a confidential United Nations report Iran tries to obtain uranium from Somalia in return for supplying weapons to the ICU. Iran promised the Islamists further weapons – but only in return for uranium, presumably for use in Teheran’s nuclear programme.
Two Iranian experts were recently sent to Mogadishu in order to negotiate this deal. While Somalia’s recoverable uranium deposits are modest, totalling about 6,600 tonnes, compared with 326,000 tonnes in Canada, they are nevertheless more accessible to the Ayathollah’s nuclear program.. Iran appears to be trying to win rights to exploit these deposits, which could then be shipped directly to Iran, through Mogadishu’s large port. An intelligence report mentioned Iranian experts negotiating with Sheikh Hassan Dahir Aweysin Dusa Mareb engaged in matters linked to uranium in exchange for arms.

While the present fighting goes on between the ICU, backed by a massive influx of volunteers from Eritrea and other Muslim countries and Ethiopia, which is supporting the Somalia’s powerless transitional government, the origins of the conflict hark back to rivalries in the Horn of Africa, which are complicated by broader Muslim Arab resentment of Christian rule in the region. Strangely enough, both Ethiopia and Eritrea are two predominantly Christian nations. Ethiopia with a population of 73 million and tiny Eritrea with 4.5 million – who are half-and-half Christian and Muslim, but are at daggers drawn. Moreover, Ethiopian prime minister Meles Zenawi and Eritrean president Isaias Afworky are third cousins and sworn enemies. Their enmity has led them already into four major confrontations in four years.

Fighting now on both sides of the Somalian war, the Eritrean government allegedly provided at least 28 separate consignments of arms, ammunition and military equipment. Last April a shipment of arms destined for ICU consisting of ex-Soviet assault rifles, PKM machine-guns, RPG-7s and ammunition arrived on a dhow at the seaport of El Ma’an. In May, an Eritrean Antonov military aircraft landed at Dhusamareeb in the Galgaduud region.

Indeed, arms are not lacking in the Horn of Africa conflict. Yemen, on the other side of the “Horn” has served as a leading smuggling route for Al Qaeda from the Gulf to the Horn of Africa. Only recently eight foreigners including four with Australian passports have been arrested for trying to smuggle weapons from Yemen to Somalia. Two were identified by security agents as brothers, Mohammed Ayub and Abdullah Ayub – sons of the former leader of Jemaah Islamiah in Australia, Abdul Rahim Ayub, his radical Southeast Asian Islamic group is held responsible by the CIA and Asian intelligence services for a series of bombing attacks on the island of Bali and in Jakarta, and is thought to have close ties to al-Qaeda.
Yemeni officials said in a statement posted on the state-run newsagency that investigations indicated they were members of Al Qaeda, all four have been studying at the Islamist Iman University, which is run by Sheik Abdul-Majid Al-Zindani. The United States lists Al-Zindani as an Al-Qaeda supporter.

It is no secret that Al Qaeda affiliated members of the Yemeni military and security forces are aiding terrorists. A Yemeni government official stated that “subversive” (Al Qaeda) elements of Yemen’s secret service have established training camps for Iraqi Baathists who later fight in Iraq. Dhows sailing from Yemen to the north-east coast of Somalia carry much of the traffic. Most shipments go unnoticed and unreported, many to the main port of the region, Boosaaso. The bulk of the merchandise is destined for Mogadishu, the hub of the Somali arms trade.

It remains to be seen where this new conflict is heading for- perhaps another choke point for the War on Glonal Terrorism?

China Has Begun Construction of a Naval Support Base in Djibuti 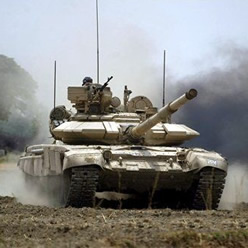