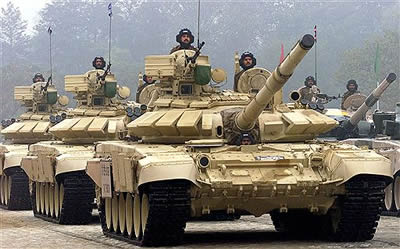 India considers buying additional Russian made T-90Cs, while delaying production of the locally assembled. India considers buying 300 upgraded T-90C tanks to be produced by Uralvagonzavod in Nizhni Tagil, Russia for $866 million during two years. Originally, the tanks were to be assembled in India, from Russian delivered kits. According to Russian sources, the Indian plant licensed to produce the tanks has not yet built the capacity to ramp up serial production.

In 2001 India agreed to buy up to a thousand T-90C tanks, to be locally assembled at the Indian tank factory located at Avadi. The agreement included the delivery of 124 tanks to be assembled in Russia, and 186 kits, to be assembled in India. When explaining the decision to buy a consignment of ready-made tanks in Russia, Singh said India hadn’t managed to master the line assembly work for some key devices of the tanks and the coordination with Russia’s suppliers was rather poor.