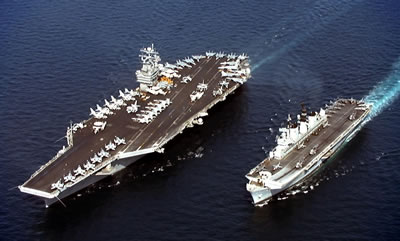 Could the new naval build-up in Persian Gulf signal a new US strategy against Iran, one which differs completely, by taking a fresh approach in the troubled four-year-old quagmire in Iraq, which has already cost over 3,000 American lives? Military experts see in the new naval deployment evidence that President George W. Bush has already rejected the key Baker-Hamilton Iraq Study Group’s recommendation to engage Iran for an exit strategy on Iraq. This indication is further strengthened, by President Bush’s reshuffling of his military brass in Iraq and Central

Command. Lt. Gen. David Petraeus (left), who replaces General William Casey, is an Iraq veteran , who headed the effort to train Iraqi security forces, will take Casey’s place as ground commander in Iraq. Admiral. William Fallon (right), a Navy veteran who to some may be an odd choice to oversee a ground conflict in a nearly landlocked country. But perhaps the new plan is based on a strong naval and air support for an offensive option, which has sofar been neglected, through protracted coalition-led counter insurgency warfare, which bogged down thousands of troops in a losing battle for Iraq.

Little attention has been paid to the potential role of ethnic minorities in the Iran crisis, particularly of the Iranian Arab minority, centered in the southwestern province of Khuzestan. Events in the oil-rich province bordering Iraq could serve as a harbinger of U.S.-British intentions in Iran, and expose Khuzestan as Iran’s Achilles Heel. Recently, a series of bombings and ethnic clashes has begun to show that something is definitely happening in Khuzestan, which could be an early warning of things to come.

One look at the Iraq-Iran map could suffice to sustain such a theory. Khuzestan is a small part in south west of Iran which was once part of the great and independent government of Elam in ancient times. The province’s military topography makes it ideal for an attack from the south-west.

The large plains there, bordering with the Iraqi marshes and the mountain regions situated to its north and eastern part, being part of the Zagros mountain ranges, shield it from the interior. This already made Khuzestan the first objective for Saddam Hussein’s assault on Iran in 1980.

Khuzestan has important advantages for the US from a military point of view. It has a long border with Iraq, and the terrain is flat, so an American military invasion could be mounted and carried out relatively swiftly. It is a short drive from Basra, the main city in southern Iraq, to Ahvaz, the Khuzestan capital. The US could carry out this kind of partial invasion in the name of “stabilizing” Iraq.

In fact, The reliable website Globalsecurity has even named such a strategic move the “Khuzestan Gambit” under which U.S. and British forces aiding an Arab uprising would turn Khuzestan into a de facto autonomous protectorate of “Arabistan” or “Ahwaz,” in order to take control of the country’s oil-dependent economy. Whether such a move could be implemented, remains to be carefully contemplated, taking into consideration that the Iranian Revolutionary Guard Corps (IRGC –Pasdaran-e Inqilab) could be a hard nut to crack if they decide to stand up and fight. For one, some 16,238 hectares of minefields in Khuzestan are still spread over a vast sector of the region, bordering with Iraq. Only last May, Islamic Revolutionary Guards Corps (IRGC) Commander Major General Rahim-Safavi claimed that the forces of Islam “are fully prepared to defend the Islamic homeland , as Khuzestan Province has always been a target for foreign greed”.

In fact, any American venture, should it come to be, could face a surprise, pre-emptive move by the Iranian Pasdaran, before it is implemented! Iran’s primary target could be a long aspired annexation of southern Iraq and its oil wealth at Basra. The newly created so-called “Arvand Free Zone” is stretching 30km from Abadan along the Shatt Al-Arab to the land border between Basrah and Khuzestan. This is in two segments: an island and adjacent land measuring 30 square km and a strip of land north of Khorramshahr measuring 25 square km. literally within a stone’s throw of Basrah. Now a large part of the Khuzestan-Basrah border is about to become an exclusive military zone, which will allow Iran to effectively annex Basra, in a relatively swift operation. The port city of Khorramshar was the scene of some of the most intense fighting during the Iran-Iraq War (1980-88). It is regarded as one of the Middle East’s most strategic points. On February 1986, 30,000 Iranian troops crossed the Shatt Al-Arab in a surprise attack to invade and occupy Iraq’s Al-Faw peninsula and create a bridgehead for further advances into southern Iraq, only to be held-up through US political intervention.

Not only for military and political reasons is Southern annexation imperative for Iran’s economy. Contrary to most assessments, it is little known that Iran must have Basrah because of future energy shortages in Iran. A John Hopkins energy assessment, just released, indicates that a steep and irreversible near term decline in Iran’s own oil production (50 per cent decline in five years) is underway!

Thus, it is of no surprise that the Iranian Revolutionary Guards’ elite Qods Force, based in Ahwaz City and the Revolutionary Guards Corps’ (IRGC) Fajr Garrison deployed in Khuzestan, serves as the organisation’s main headquarters, running the vast underground network in Iraq supporting Iran loyalists among the Arab Shiite insurgencies, which could already prepare the groundwork for a military operation into Iraq, when the timing is right. This could even happen sooner than expected.

According to predictions, President Bush has decided to escalate against Muqtada al Sadr by committing an additional 20,000 US troops to Iraq to break up his militia and apprehend him in Baghdad. For this offensive, the US Army has already shifted its main bulk of forces from the combat zone in Western Iraq to the Capital. (Defense -update Analysis -December 03, 2006: Western Iraq – becoming Al Qaeda’s Safe Haven?) But experts believe, that even if the new venture will succeed, Iraq will then fall into Iran’s orbit. Iran could then take Basrah and southern Iraq, with Sadr’s forces out of the way. By taking Basra, Iran would also control the US’s main exit point from Iraq as the battle for Iraq focuses mainly on the Battle for Baghdad. It goes without saying, that the consequences to the Coalition would be catastrophic!

But on the other side of the hill matters are not that simple either. Much of the civil unrest seen in Iran over the past few months has occurred in Khuzestan, which was once an autonomous Arab emirate protected by the British and known as Arabistan or Al-Ahwaz. until it was over-run by Reza Pahlavi’s forces in 1925. Here, Iranian Arabs have reacted to state terrorism with mass protests, which remain largely unreported in the Western news media. Indeed, for a short period in April 2005, the Iranian government even lost total control over large parts of Khuzestan in an Arab uprising. The riots became sparked by the leaking of a top secret memo written by former Vice-President Ali Abtahi which outlined a 10-year plan for the ‘ethnic restructuring’ of Khuzestan to reduce the Arab population from 70 per cent of the total population to less than a third.

In perhaps a last moment effort, to pacify the outrageous Khuzestanis, President Mahmoud President Mahmoud Ahmadinejad and his cabinet ministers arrived in the southwestern Khuzestan province last Tuesday on a four-day visit. Ethnic unrest is a problem throughout Iran and the regime traditionally attributes this to foreign agitation. Two former visits to Khuzestan were cancelled abruptly, when the president’s motorcade was ambushed in the Province on 14 December 2005.

US new strategy evolving into an open conflict with Iran, would not only aim to stem its nuclear ambition, which at this stage could become of less than immediate concern, based on assumptions, that this would still take time to mature. But to prevent an Iraqi offensive into Basrah Province, should become top priority to US strategy in Iraq and the Gulf region, in order to, at least secure a safe “exit gate” for a planned and orderly withdrawal from Mesopotamia when this becomes due.

In any such contingencies, Khuzestan presents the the lynchpin of any western ground operation. According to Zolton Grossman in his provocative article published last year, ” the first step taken by an invading force would be to occupy Iran’s oil-rich Khuzestan Province, securing the sensitive Straits of Hormuz and cutting off the Iranian military’s oil “. With sufficient airpower deployed already in the region, the carrier groups can launch massive strikes supporting an even limited ground offensive. Of especial is the latest deployment of the USS Bataan Strike group carrying over 2,000 Marines of 26th Marine Expeditionary Unit. Equipped to insert forces ashore by helicopter, landing craft and amphibious vehicles. The Bataan is also equipped with helicopters and fast hovercraft capable of landing thousands of Marines on beaches and providing the landing with superb air cover support. The Bataan Strike Group is commanded by Capt. Donna Looney and includes Amphibious Squadron Two, Bataan, USS Shreveport (LPD 12), USS Oak Hill (LSD 51) , USS Vella Gulf (CG 72) , USS Nitze (DDG 94) , USS Underwood (FFG 36) , and USS Scranton (SSN 756).

No doubt the situation may well clear up by coming Wednesday, when US President George W Bush will offer some of his new strategic plans solving the Iraq fiasco.