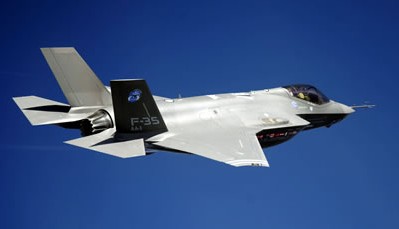 The second flight was flown by F-35 Chief test pilot Jon Beesley made on January 8th, 2007. 10 minutes after takeoff Beesley retracted the landing gear, climbed from 15,000 to 20,000 feet to evaluate handling qualities and engine operation in the cruise mode at Mach 0.6 (~ 450 m.p.h.) and Mach 0.7 (~ 530 m.p.h.). The handling tests included rolls, turns, angle-of-attack changes and engine throttle changes. The flight lasted 62 minutes and was executed exactly as planned.

“The maturity of this highly integrated aircraft for its second flight is dazzling – when it’s time to fly it is always ready and takes minimal time to get out of the chocks,” said Jon Beesley, F-35 Chief Test Pilot. “The flight underscores that the Lightning II flies just as our engineers predicted. This was the first time that we have retracted the landing gear and the aircraft handling qualities were outstanding. I continue to be impressed by this marvelous airplane’s performance and handling characteristics.”

The first F-35 Lightning II Joint Strike Fighter took off on its initial test flight from Lockheed Martin in Fort Worth, Texas on 12:44 December 15, 2006 piloted by the program’s Chief Pilot Jon Beesley. The aircraft was airborne 35 minutes on its maiden flight. the jet lifted off and began a climb-out to 15,000 feet. Beesley then performed a series of maneuvers to test aircraft handling and the operation of the Pratt & Whitney F135 turbofan and subsystems.