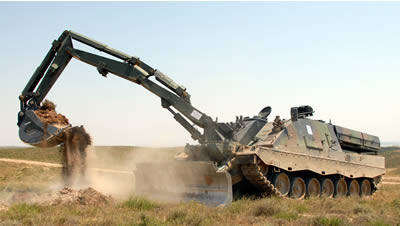 Rheinmetall Defense Systems will supply 12 heavy armored engineer vehicles based on the Leopard 2 chassis to the Swiss Army Engineer. The first “Geniepanzer” designated Kodiak, will be delivered within two years. Kodiak represents a new generation of armored engineer vehicles, for which the Swiss Army is the first customer. The new vehicle was developed by a consortium established by Rheinmetall Landsysteme GmbH of Kiel, Germany and RUAG Land Systems of Thun, Switzerland. According to RDE, A number of nations have already expressed an interest in this state-of-the-art system; some have launched procurement projects already.

The Kodiak is equipped with various sets of mission specific engineer tools to support various missions, such as heavy-duty combat engineering including obstacle breaching, earthworks, digging, trenching and debris removal etc, as well as minefield breaching.
To perform its primary mission, the Kodiak is equipped with a high-performance hinged arm excavator mounted in center position, as well as a dozer system with innovative cutting and tilt angle settings and a double-winch system consisting of two 9 ton capstan winches. When combined and deployed in multiple traction mode, these provide a pulling force of up to 62 tons. The excavator bucket can be exchanged for a number of other devices, including a hydraulic hammer and a universal-gripper, attached to a quick-release coupling. All these tolls are electro-hydraulically controlled and can be operated by the driver with two joysticks.

When tasked for minefield breaching, the dozer blade is replaced by a full-width mine plough. For this role, additionally equipment is provided, including a signature-duplicator and lane-marking units. The Kodiak’s anti-landmine protection technology features correspond to those of the latest generation of Leopard 2 MBT.