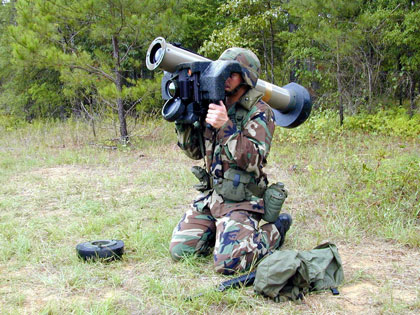 Block 1 upgraded Javelin missile recently passed qualification flight tests at Redstone Arsenal, in Huntsville, Alabama. The U.S. Army continues to field the Javelin missile and has already contracted for Block 1 missiles as part of its fiscal year 2005 contract. The upgraded missile uses an improved rocket motor that reduces the missile’s time of flight. Other improvements are made in the command launch unit (CLU), introducing software enhancements. The warhead has also been modified to increase lethality against a wider range of target sets. The combat proven Javelin have scored over 95 percent mission success in more than 1,000 rounds fired in ongoing operations worldwide. Production is well underway at suppliers and began in Troy, Ala., in the fourth quarter of calendar year 2006.

Javelin is in service with the U.S. Army and Marine Corps and has been deployed by the U.S. and Australia in Operations Enduring Freedom and Iraqi Freedom. Coalition forces also are employing the CLU effectively in surveillance. Javelin has been selected by the armed forces of 10 nations: the United States, United Kingdom, Australia, New Zealand, Ireland, Norway, Lithuania, the Czech Republic, Taiwan, Jordan, and the Sultanate of Oman.