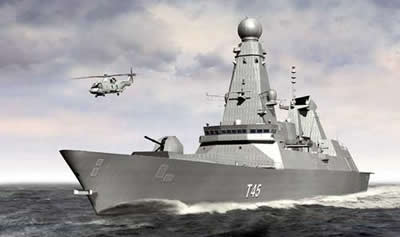 The Royal Navy’s newest warship, the Type 45 Destroyer HMS Dauntless, was launched on the Clyde January 23, 2007 by Lady Burnell-Nugent, wife of the Commander In Chief of the Fleet. HMS Dauntless is the second of the new Type 45 class of Anti-Air Warfare Destroyers.

BAE Systems is the prime contractor for the delivery of the first six Type 45 Destroyers under contract worth over £6 Billion. Vosper Thornycroft at Portsmouth and BAE SYSTEMS Surface Fleet Solutions will both build and outfit substantial sections of the ships. The first ship of the class, HMS Daring, will start her sea trials later in 2007 and will enter service in 2009. HMS Dauntless is expected to go into service early next decade. Three further Type 45 ships are under construction and work on the sixth ship is due to start soon.

Type 45 destroyers are equipped with a helicopter landing pad operating Helicopter the Westland Lynx MHA 3/8 or Merlin EH101 HAS 1. In the offensive anti-submarine role, these helicopters can carry the Stingray torpedoes.