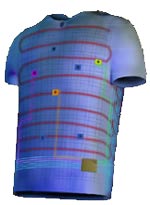 Sensatex, Inc. announced today that it would shortly begin field trials of its patented SmartShirt System, a seamless shirt designed to monitor an individual’s heart rate, respiration and movement wirelessly and remotely. The field tests are the final step before the product will be commercially available. The new garment is based on patents licensed from Georgia Tech University and additional patents filed by Sensatex.

The garment collects physiological signals from the wearer’s body which are converted to digital signals by a built-in controller and sent wirelessly to a base station through either Bluetooth or ZigBee wireless technology. The company is seeking to establish cooperation with other companies to examine test applications for the new garment. Among those are first responders and military. The SmartShirt will be tested in a variety of environments including indoors, outdoors, and underwater, as well as in very dry and very humid settings. Based on the data collected during the test, Sensatex plans to complete the product’s commercialization, proceed for the first FDA application using a smart textile system. Early research for the SmartShirt System was funded by the Defense Advanced Research Projects Agency (DARPA) and the Technical Support Working Group (TSWG). Beta testing for the system was announced last year.

The SmartShirt is a seamless light, breathable, nylon fabric with fully integrated conductive fibers, creating connectivity to acquire and transfer physiological signals to a small controller where the signals are digitized and sent wirelessly to a remote location. The SmartShirt is fully washable, greatly expanding the fabric’s future applications. In 2006, the system was named “Product Innovation of the Year” by a leading global analyst firm.