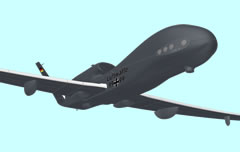 The German Ministry of Defence (MoD) has awarded a € 430 million ($559 million) contract to EuroHawk GmbH, a joint-venture company formed by Northrop Grumman Corporation (NYSE: NOC) and EADS, for the development, test and support of the Euro Hawk unmanned signals intelligence (SIGINT) surveillance and reconnaissance system. The joint team will conduct integration and flight test activity in Germany in late 2009. Delivery of the first demonstrator is scheduled for 2010, with the following four systems scheduled tentatively between 2011 and 2014.
The Euro Hawk unmanned aerial system will serve as the German Air Force’s high altitude long endurance (HALE) SIGINT system. It will be based on the current RQ-4 Block 20 Global Hawk platform, built by Northrop Grumman. The unmanned aircraft will be equipped with a new SIGINT mission system developed by EADS and will be able to maintain mission endurance of up to 30 hours.

The EuroHawk Ground segment, to be provided by EADS will receive and analyze the data from the airborne sensors, process them on the ground and support expert analysis, and rapid compilation of an electronic order of battle.

EADS and Northrop Grumman established their cooperative effort in August 2000, addressing the German Ministry of Defense requirement for airborne wide-area surveillance and reconnaissance to replace the aging fleet of Breguet Atlantic aircraft, which have been in service since 1972. This move was followed by a bilateral project agreement between the U.S. Air Force and the German MoD, signed in October 2001. The first phase of the project included the operation of the HALE UAV concept, the mission system integration, culminating in six flight demonstrations of ELINT equipped Global Hawk, deployed to Nordholz in October 2003. It was the first successful operation of a UAV in the heavily crowded, tightly controlled European airspace.