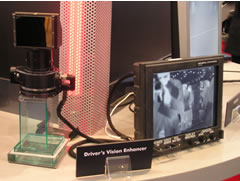 The DVE B-kit System is comprised of two Line Replaceable Units (LRUs): the Sensor Module (SM) with the integral Uncooled Mini-Microbolometer module and the Display and Control Module (DCM). The system can be fitted into the vision block of various combat vehicles or mounted externally on the vehicle to maximize the viewing area.

On January 11, 2007 DRS received another contract worth $60 million, for the supply of additional DVE systems. To date, the company have been awarded DVE contracts valued at $124 million. The first production deliveries occurred in 2004 and are scheduled to continue through July 2008.