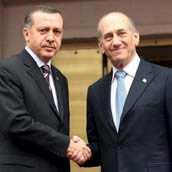 Prime Minister Ehud Olmert’s overnight visit to Turkey has focused attention to the strategic dialogue between the two democratic nations in the Eastern Mediterranean. Turkey is a powerful, pro-Western, not Arab but definitely Muslim country and Israelis had hoped for years that its expanding relations would break the impression that the Muslim world opposed the Jewish state.

The Turks were initially cautious, but came round about a decade ago when they reassessed their policies. They felt that dangerous neighbors and hotspots of instability were across their borders, and believed that Israel’s influence in the United States could help especially in countering Greek and Armenian lobbies in Washington. The Turkish army’s Deputy Chief of Staff Gen. Ergin Saygun was in Israel late last year discussing plans and more such visits are expected following Olmert’s visit. But there seems to be much more at stake than mere diplomatic photo opportunity exchanges between Turkey and Israel.

Virtually unnoticed, the inauguration of the Ceyhan-Tiblisi-Baku (BTC) oil pipeline, which links the Caspian Sea to the Eastern Mediterranean took place on the 13th July 2006, at the very outset of the Second Lebanon War. The official reception took place in Istanbul, hosted by Turkey’s President Ahmet Necdet Sezer in the Çýraðan Palace. Many dignitaries among them, British Petroleum’s CEO Lord Brown and BP leading the BTC pipeline consortium of western oil companies and senior government officials, top oil ministers and leaders of western oil companies, from Britain, the US, Israel and Turkey were all present at the ceremony.

The 1,770 km Baku Tbilisi Ceyhan pipeline, simply known by the acronym BTC, is one of the world’s longest and cost US$4 billion to build. It snakes its way from the Sangachal oil and gas terminal south of the Azeri capital of Baku on the Caspian Sea through neighboring Georgia and some of the most mountainous regions of the Caucasus to finally reach the Turkish port of Ceyhan on the Mediterranean.

The BTC pipeline totally bypasses the territory of the Russian Federation. as it transits through the former Soviet republics of Azerbaijan and Georgia, both of which have become US ‘protectorates’, firmly integrated into a military alliance with the US and NATO. Moreover, both Azerbaijan and Georgia have longstanding military cooperation with Israel. Israel has a stake in the Azeri oil fields, from which it imports some 20% of its oil.

In April 2006, Israel and Turkey announced plans for four underwater pipelines, transporting water, electricity, natural gas and oil to Israel, by-passing Syrian and Lebanese territory. The pipeline is aimed bringing water to Israel, by pumping water from upstream resources of the Tigris and Euphrates river system in Anatoli has been a long-run strategic objective of Israel to the detriment of Syria and Iraq.

In its context, the BTC pipeline dominated by British Petroleum and American interest, has dramatically changed the geopolitics of the Eastern Mediterranean, which is now linked , through an energy corridor, to the strategic Caspian sea basin. But there is more at stage here.

The geographical fact is that Ceyhan and the Mediterranean port of Ashkelon are situated only 400 km apart. Oil can be transported to that port in tankers or through a specially constructed under-water pipeline. From Ashkelon the oil can be pumped through already existing pipeline to the port of Eilat at the Red Sea, which had been very active during betters days between the Shah’s Iran and Israel during the Sixties. From Eilat oil it can be transported to India and Far Eastern countries in tankers, thus outflanking the vulnerable Hurmoz straits.

Last May, the Jerusalem Post published an article that Turkey and Israel are negotiating the construction of a multi-million-dollar energy and water project that will transport water, electricity, natural gas and oil by pipelines to Israel, with the oil to be sent onward from Israel to the Far East. Antalya Mayor Menderes Turel mentioned this in a press conference. The project, which would likely receive foreign economic backing, is currently undergoing a feasibility study sponsored by the Luxembourg-based European Investment Bank.

The United States’ ultimate strategic design is intended primarily to weaken Russia’s role in Central Asia and the Eastern Mediterranean, while isolating Iran from this important energy source.

Iran being not only a major oil producing country is also a direct stepping stone between the Caspian region and the Persian Gulf. As such, it would certainly like to see Caspian oil flowing through its territory rather than through Turkey. Moreover, having full control over the Persian Gulf shipping lanes, through its military control on the strategic Hormuz strait, Iran could virtually strangle, at will, all international oil supplies, if political pressure on its nuclear program intensifies.

Iran’s claim to Caspian oil dates back to the last century when the Russian Empire and Persia, later Iran signed agreements in 1921 and 1940 recognizing the Caspian Sea as a lake belonging to and divided between them. Following the dissolution of the Soviet Union, Iran wanted this agreement to continue despite assertions of independence by the breakaway states of Kazakhstan, Azerbaijan and Turkmenistan.

Five years ago, the official Iranian news agency IRNA quoted a statement of the Iranian Oil Ministry as saying that it protests prospecting by foreign companies in Iran’s claimed 20 percent sector of the Caspian Sea. The warning came a day after Iran summoned Azerbaijan’s charge d’affaires in Tehran to protest plans by the state-run oil company of Azerbaijan, Socar, to carry out oil exploration studies with foreign companies at the Alborz oil field “in Iran’s sector of the Caspian Sea.” Iran even threatened with military action if its warnings would remain unheeded and indeed, on July 23, 2001 in blatant violation of international law, an Iranian warship and two fighter jets forced a research vessel working on behalf of British Petroleum (BP)-Amoco in the Araz-Alov-Sharg field out of that sector.

In fact, the BTC pipeline is far from secure by itself. Western intelligence reports indicate that Iran republican guards (IRGC) are carefully expanding support for subversive elements in Armenia, a country which is still technically at war with Azerbaijan. It is well known, that in the Armenian enclave of Nagorno-Karabakh the conflict between Armenian and Azeris is still going on. Armenian nationalists might decide to attack the BTC in order to hurt Azerbaijan, which derives most of its income from oil sales. The pipeline route passes through or near seven different war-zones. Its route passes just 10 miles from Nagorno-Karabakh, the area of Azerbaijan occupied by Armenia, where a bloody conflict killed at least 25,000 people It passes through Georgia, which remains unstable, with separatist movements in Abkhazia and South Ossetia – movements which the Georgian government tried to violently suppress during the 1990s. Just across the border into Russia, and still only 70 miles from the BTC pipeline route, the horrific conflict in Chechnya continues. The region also saw related conflict in neighboring Dagestan in 1999, and fighting between the Russian republics of North Ossetia and Ingushetia in 1992. In Turkey, the BTC route passes through the edge of the area of the conflict between the Turkish state and the Kurdistan Workers Party (PKK), now known as Kongra-Gel. And Russia, by all means, is unlikely to view this new American strategic move without adequate response.

Moscow defense ministry sources pointed out recently, that the planned Russian naval base in Tartus will enable Russia to solidify its positions in the Middle East under the pretext to ensure security of Syria. Moscow intends to deploy an air defense system around the base – to provide air cover for the base itself and a substantial part of Syrian territory. It could also conduct underwater activities to sabotage submerged pipelines, or at least threaten to do so, if its demand will not be adhered to. A dangerous situation could emerge, if Israeli and Russian activities in the Eastern mediterranean could clash with each other on matters of highly strategic interests.