Another field of activity pursued by unmanned ground systems are the heavy engineer vehicles. In the past, robotic systems were implemented in such vehicles, but such functions were primarily used in remote control operation, requiring special expertise and complex manipulation of the vehicle’s systems. By utilizing the latest, digital control and remote vision, autonomy and control are elevated to a new level which enables operators to use the systems as effectively as they were operating it from the cockpit. 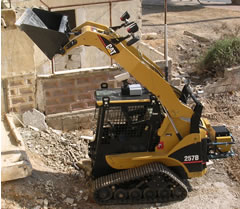 As part of the robotic Mini-Cat program, the team developed a dedicated robotic control system to convert Caterpillar’s Multi-Terrain Loader (MTL) type MTL 257 B (also known as the “MiniCat”), into an unmanned platform for use in military, para-military, law enforcement, and civilian operations. The vehicle has been integrated with a military-qualified robotic control system control system, developed by InRob into the MTL. The ergonomic remote control unit utilizing a tough touch screen, developed specifically for this platform, is providing the operator full control of typical complex tasks in real time. All the functions provided by the manned MTL 257 re enabled via remote control, including state of its scoop, health of the power pack, view from vehicle-mounted cameras, etc.

The new robotic MTL will fill the strong demand for a UGV of this type by performing a broad range of engineering and debris-clearing applications while providing customized solutions using the most advanced technology. 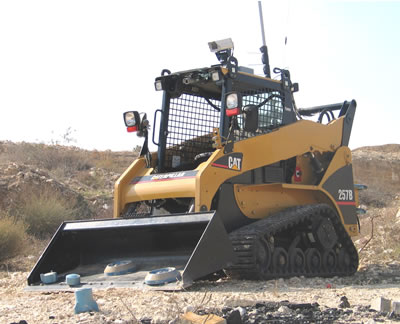 Ramta is also working on a much heavier unmanned vehicle – the robotic controlled D9T bulldozer. This project is a jointly-funded program between the Israel Ministry of Defense (IMOD) and IAI Ramta. The program is under development over the past two years with first systems planned to be completed for testing in 2007. The IDF is already operating robotic D9 dozers, developed at Ramta under an earlier program. The new robotic D9T will be more advanced. The IDF has already ordered the first conversion kit with the first D9T expected to become operational by the end of 2007. The robotic dozer uses the latest in digital command and control technologies to interface with the onboard computer. The new platforms is both automated functions and semi autonomous features to handle heavy explosive charges and dangerous obstacles without risk to human life.