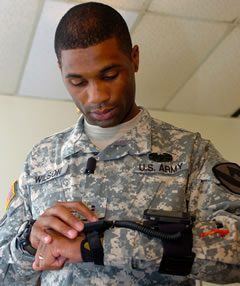 The US Army is evaluating a new language translation system promising to improve communications between troops and the local population. The solar-powered iPod-based V-Communicator has been designed to help Soldiers communicate with locals in Iraq and Afghanistan and gives the Soldiers access to more than 400 phrases in five different languages to include Pashto, Iraqi Arabic and Modern Standard Arabic. Currently in use by approximately 700 military service members in Iraq and Afghanistan, the one-way translation device also provides video cues describing cultural gestures in the form of hand signals that may be common to a specific region, allowing for cultural awareness.

With the swipe of a finger over the device, Soldiers can select the language they need from a menu and choose a topic from a mission list to find an appropriate phrase for whatever situation they find themselves in.

Once they choose the mission, they will see a list of phrases in English. Each of the phrases have a phonetic Arabic translation beneath them and when Soldiers press on the phrase they want to use, a video will play showing an animated, virtual Soldier saying the phrase in Arabic and the voice of the animated character plays through the device’s speaker. Along with that, the phonetic spelling of the Arabic phrase also appears on the screen.

“It’s very useful in situations where you may have only one to two interpreters on the ground, and about 80 to 90 Soldiers on the ground, so you may not have enough interpreters to go around in a particular situation,” said Ernie Bright, operations manager at VCOM, the developer of the V-communicator. Soldiers can learn Arabic or other language phrases from the device or they can use it to communicate for them through the tool’s speaker, according to Bright. 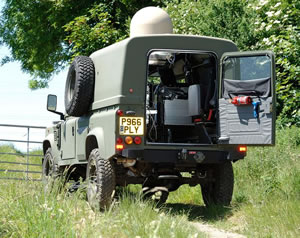