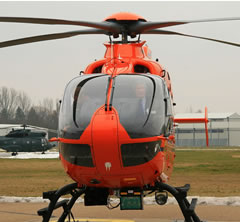 EADS Defence & Security (DS) is fitting Eurocopter EC 135 helicopters deployed by the German federal police with the HELLAS (Helicopter Laser Radar) obstacle warning system. The first two of 16 rescue helicopters were handed over to the customer. The remaining helicopters will be delivered and equipped with the system within the next two years.

HELLAS is a laser-based obstacle warning system, which detects obstacles reliably even if the pilot has difficulties making them out during the flight, when thin obstacles such as suspended electrical wires are so thin that they are almost invisible to the pilot. The system scans the area in front of the helicopter with an eye-safe laser beam, detecting obstacles such as wires at distances of up to 1,000 m’. The latest version of HELLAS enables the pilot better situational awareness by superimposing the obstacle over a grey-scale image of the terrain in front of the helicopter. Potential obstacles are displayed in a red color for intuitive recognition and avoidance.