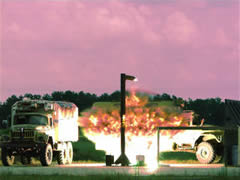 During the $17.7 million second phase, Boeing will integrate the FLM warhead into the SDB I weapon, perform a series of ground and flight tests, and manufacture a limited number of FLM weapons.

The FLM warhead, developed by Lawrence Livermore National Laboratory and the U.S Air Force Research Laboratory, features an advanced, multi-phase blast explosive and a composite carbon fiber warhead case, allowing for pinpoint strikes with low collateral damage.
The weapons are slated for flight testing in August 2007. Boeing will deliver the first 50 weapons for operational assessment in January 2008, with the Air Force potentially procuring as many as 450 SDB I FLM units through 2012.