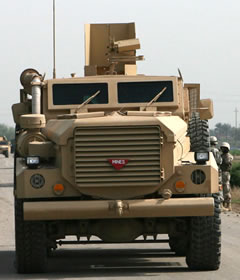 Heavily armored vehicles designed with V-shaped hulls operated by the U.S. Marines proved to be better protected than conventional armored vehicles. The V-shaped hull deflects the force of blasts from homemade bombs buried in roadways. In more than 300 attacks since last year, no Marines have died while riding in Mine Resistant Ambush Protected (MRAP) vehicles. These vehiclew were operated initially by explosive ordnance disposal (EOD) units, where they were known as Joint Explosive Ordnance Disposal Rapid Response Vehicle or JERRV, But as they proved their higher protetion levels, they were dispatched to support patrols of regular Marine units. The Marines currently operate about 100 of these vehicles and are planning to field additional 3,000.

According to Brig. Gen. John Allen, deputy commander of coalition forces in Anbar, quoted by in USA Today article last week, the Marines tracked attacks on the vehicles since January 2006. He said there has been an average of less than one injured Marine per attack on the vehicles.

There have been 1,100 attacks on coalition vehicles during the period in Anbar, the heart of the Sunni Muslim insurgency. Attacks on other vehicles caused more than two casualties per attack, including deaths, Allen said. The Marines did not release the number of deaths involving Humvees.

Pentagon casualty records show that of the 60 combat deaths this month in Iraq, 35 troops have been killed by improvised explosive devices. None was a Marine. At least 16 of the dead were riding in Humvees, according to records and published reports. IEDs are responsible for 70 percent of U.S. casualties in Iraq, Pentagon records show.