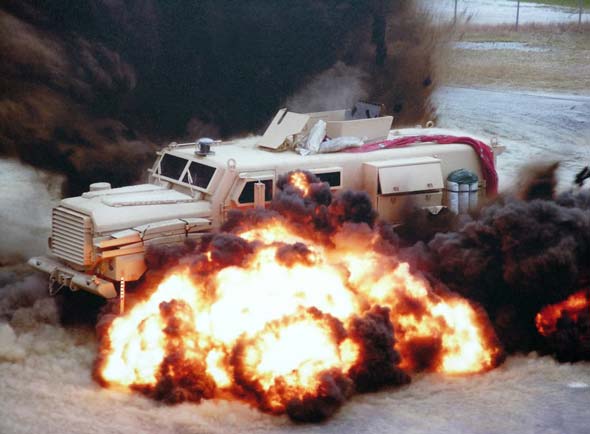 Cougar, developed and produced by Force Protection Inc. is a multi-purpose, 12 ton mine protected armored patrol vehicle. The design uses a monocoque, bulletproof and blast-proof capsule fitted with transparent armored glass, which protects the driver and crew from small arms fire, mine blasts and IED. Typical roles for the vehicle are armored, mine protected troop transport for security, stability and peacekeeping missions, protected weapons platform, law enforcement special response vehicle, counter IED an EOD / Range Clearance vehicle. The vehicle can accommodate 10 passengers in a 4×4 configuration and 16 passengers in a 6×6 configuration. Cougar was selected to serve with the US Marine Corps as a Hardened Engineer Vehicle (HEV), to support engineer mine clearing and explosive ordnance disposal teams deployed in Iraq. As of June 2006, there are more than 130 Cougars and Buffalos in Afghanistan and Iraq. Since their deployment to Iraq in 2003 the Cougar and Buffalo vehicles employed with explosive ordnance disposal teams and engineers units have taken about 1,000 IED hits without a loss of life, said Wayne Phillips, a company vice president in charge of Marine Corps programs. The vehicle has proven to be superior to less protected vehicles, such as the up-armored Humvee or armored trucks.

The initial 122 vehicles were procured in two batches, at a total cost of US$97 million. This procurement is part of the Joint Improvised Explosive Device (IED) Defeat Task Force acquisition for Joint Explosive Ordnance Disposal Rapid Response Vehicle (JERRV). First vehicles were shipped on August 2005. A follow-on $50.8 million order for 79 additional vehicles was released by the US Navy on May 2nd, 2006 to be delivered within a year, by May 2007. In May 2006 Spartan Motors announced a contract from Force protection, for the supply of 45 chassis assemblies for the USMC JERRV program.

Cougars will also make a significant part of the Iraqi fleet of armored patrol vehicles (ILAV), to be supplied by BAE Systems. On November 9th, 2006 the US Marine Corps announced a new order for 200 additional Cougar Joint EOD Rapid Response Vehicles (JERRV) and 80 Buffalo mine protected explosive devices clearance vehicles. The total contract worth is estimated at $214 million. Following the recent orders, Force Protection signed GDLS and Armor Holdings as subcontractors for the manufacturing of the Cougar to meet the growing demand. In December 2006, Force Protection and General Dynamics have teamed to propose the Cougar for the joint US Marines, Navy and Army Mine Resistant Ambush Protected (MRAP) program. Due to its maturity and proven combat survivability, Cougar is currently the vehicle of choice for the USMC MRAP program. In January, February and April 2007 the USMC issued three orders for a total of 1,400 vehicles, making about 25% of the total initial order for the new V-hulled armored vehicles.

Through 2006 Force Protection built and supplied 378 cougars as a subcontractor to BAE Systems. Production order for 20 additional vehicles was awarded to BAE Systems in October 2006 bringing the total amount ordered to date to 398. The Pentagon plans to invest over $445 million to buy over a thousand armored vehicles for the Iraqis. First ILAVs were delivered in August 2006. The ILAV uses a chassis produced by Spartan Motors. Spartan’s share of the total program is expected to reach $45 million. Spartan plans to complete production of the ordered chassis by mid 2007.

On August 10th 2006 the Pentagon awarder Force Protection a US$62.9 million contract for the 86 British destined Cougars, This foreign military sale program to be delivered through May 2007. According to UK Ministry of defense announcements, British forces will receive 100 Cougars (to be designated “Mastiff”). The vehicles are expected to be combat ready by the year’s end. Cougar meets the requirement for a well protected, wheeled patrol vehicle with a less intimidating profile than tracked vehicles like Warrior or FV430. The vehicles will be fitted with removable spall liners, made of LAST armor. Once the vehicles are delivered they will be customized with Bowman radios and electronic counter-measures and then fitted with additional armor beyond the standard level, to ensure they have the best possible protection. The first batch of vehicles were delivered by mid November 2006.

While the Cougar is considered a medium-heavy vehicle, Force Protection is developing a Mine-protected Utility Vehicle / Rapid Deployable (MUV-R) called Cheetah, a lighter-weight personnel carrier that incorporates the same protective capabilities as the Cougar. It is designed for a possible future alternative for up-armored Humvees.

This new vehicle is expected to be ready for field testing by the end of 2006.

In October 2005 RAFAEL announced an agreement with FPI to equip the Cougar with reactive armor suit, similar to the type produced by the company for the US Army Bradley Armored Infantry Fighting Vehicles (AIFV). The new reactive armor system uses small volumes of insensitive explosives designed specifically for thin armored vehicles. 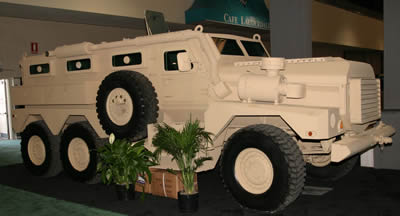