The USMC is expected to replace 156 current CH-53E Super Stalion helicopters with the CH-53K aircraft. The CH-53K will maintain virtually the same footprint as the CH-53E but will nearly double the payload to 27,000 pounds over 110 nautical miles under “hot high” ambient conditions. The CH-53K’s maximum gross weight will increase to 84,700 pounds from 72,500 pounds for the CH-53E. 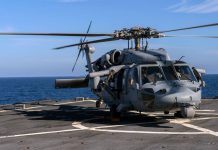 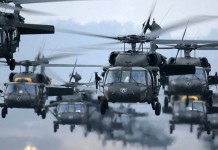