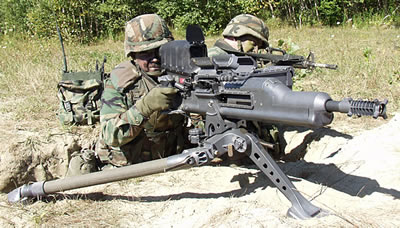 The XM307 Advanced Crew-Served Weapon (ACSW) 25mm system will replace current crew-served weapons such as the M-19 Mk3 40 mm grenade launcher, and heavy M2 0.5″ machine guns in US Army. ACWS is developed as the next-generation mounted and dismounted machine gun that will provide accurate long-range firepower, including air-bursting munitions, in a lightweight system package.

Individual Airburst Weapon System is currently under development and intended to address the capability gap of defeating defilade targets. The weapon has the capability to hit point targets at a distance of 500 meters and area targets at 700 meters. 25mm munitions currently in development include High Explosive Air-Burst (HEAB), armor piercing, door breaching, anti-personnel, and two types of non-lethal munitions – blunt and agent dispersing airburst.

The XM-307 Advanced Crew Served Weapon (ACSW) and a derivative XM-312 machine gun are designed to fire 25mm and 0.50 Caliber (12.7mm) ammunition. ACSW will fire the same 25mm ammunition developed for the XM25. The XM307 weighs about 92 lbs including the gun, two ammunition cans of 37 rounds each, fire control and tripod. Maximum rate of fire is 250 rounds per minute. However, the weapons accuracy enables gunners to achieve the desired effect with fewer rounds. The XM312 version will weigh about 43.7 lbs, (compared to the current 128 lbs of the M2HB). It will use gas recoil operation, and have soft recoil mechanism to minimize load on tripod or mount and least affect the gunner. Effective firing range for lethal and suppressive fire is about 2,000 meters. The weapon will be able to fire all types of 0.50 Caliber ammunition, including ball, API and SLAP.

The development phase is funded through 2007, and managed by by GDATP under a cost-plus-award-fee contract with a total projected value of $94.8 million awarded by the U.S. Army Tank-Automotive and Armament Command. GDOTC is developing the new family of 25mm ammunition while Raytheon is responsible for the full solution fire control.

General Dynamics is also working on a development of a Remotely Operated Variant (ROV) of the XM-307 which will be used in the US Army Future Combat Systems family of vehicles. The weapon will be integrated into a vehicle-mounted firing station that is remotely controlled by the operator. Cameras and range finders in the firing station will allow the operator to accurately identify and engage targets while remaining safely protected within the vehicle. The ROV program is also funded by the U.S. Army Tank-Automotive and Armaments Command (Picatinny).