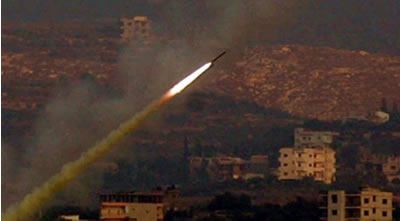 Assessment of the Second Lebanon War By Col. David Eshel

During the Second Lebanon War of summer 2006, Hezbollah achieved for the first time, strategic terror effects with tactical rockets – with thousands of WW2 era Katyusha rockets it rained down on northern Israel. The terrorist army had stockpiled over 14,000 short- and medium-range rockets in calibers between 100mm to 302mm weapons. Originally designed as area-suppression and psychological weapons to support tactical assaults, these rockets gained a new interest as terror weapons with strategic resonance, reaching their climax with hundreds fired daily on targets in northern Israel for nearly five weeks. The larger caliber rockets, mainly Syrian origin 302mm (designated Khaibar-1 by Hezbollah) and Iranian Fajr-3, were used to strike deep into Israel, repeatedly hitting and virtually closing down the strategic port city of Haifa and even landing halfway down the coast toward Tel Aviv.

The high-explosive warheads of these rockets were augmented with anti-personal steel balls and fragmentation sheets, causing deadly effect on Israeli civilian targets. Some were also modified to improve concrete penetration, to improve their effectiveness urban area. Official Israeli police reports documented 4,228 rocket impacts inside Israel. Thanks to an organized civilian defense, Israel suffered only 53 fatalities from these attacks, but along with 250 severely and 2,000 lightly wounded civilians.

During the first two weeks of the war, Hezbollah rocket attacks averaged about 100 rockets per day. In early August, Hezbollah doubled the rate of attack to a daily average of 200 and in spite of IDF intensive operations; Hezbollah still was able to launch 250 rockets Aug.13, the last day before the cease-fire. Uzi Rubin, former head of Israel’s Missile Defense Organization concluded that “Israeli counterattacks apparently had no serious influence on Hezbollah’s rate of fire but did have effect on the accuracy and geography of the attacks.” Rubin advised that Israel needed to reduce the “flash-to-bang” cycle – the interval from the launch of a Hezbollah rocket to the Israeli counterattack – to a few seconds from the time of pinpointing launcher location. Rubin’s second major conclusion was that Israel needed without delay, “to develop and deploy effective and affordable active defense against rockets to protect vital civilian and military installations.” But in the war, Israel had no adequate answer to the problem, which it faced from tactical high-trajectory weapons.

Only the air force performed with utmost precision against the medium range rockets. Armed with excellent strategic intelligence and highly accurate targeting capability, achieving an impressive target-identification-to-kill cycle time of less than five minutes, the Israeli pilots succeeded in hitting nearly all of Hezbollah’s long-and medium range rockets on the first night of the war: 18 out of 20 Iranian-built Zelzal 2 launchers, as well as virtually all Fajr 4 and 5 weapons, were destroyed, ensuring the safety of Tel Aviv. Toward the end of the war, the air force developed effective means to strike medium range rocket launchers almost immediately after launching their first salvo, practically reducing their life cycle to a single shot. However the short range, man-pack 107 and 122mm rockets that rained down on Israel day after day proved too elusive for technical collection means. Notoriously inaccurate, most of the rockets proved ineffective, but nonetheless achieved multiple strategic goals when employed en-masse.

When the Syrian-modified 302mm rockets started landing in Haifa Bay, government agencies began raising concerns about the chemical plants there. The Rafael Armament Development Authority, one of Israel’s leading defense contractors, was contacted and work hurriedly began at its Haifa headquarters to modify and deploy a counter rocket early warning and intercept capability. At the time, the company tried making modifications to the Barak missile system, used on Navy ships to intercept incoming missiles. An ad-hoc deployment on Mount Carmel, of a Patriot-2 battery also proved inadequate to intercept incoming rockets, but its radar was used to enhance early impact alert warning.