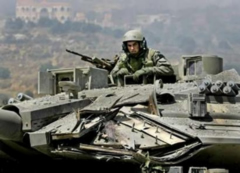 Assessment of the Second Lebanon War By Col. David Eshel

Four types of Merkava tanks were in action in Lebanon 2006, including Merkava Mk4, the Merkava Mk 2D (with its distinctive sloped turret), the standard Mk2 (mostly with reserve units), and Merkava Mk3Baz.
Towards the end of the fighting, Brigadier General Halutzi Rodoi, the chief of the IDF Armored Corps was asked to assess the performance of his tank force and especially the lessons drawn from the fighting against advanced anti-tank missiles fired by Hezbollah on the coveted Merkava Mk4, which saw its first combat engagement in Lebanon. According to General Rodoi, the Merkava proved to be well protected and designed to minimize the risk even when it was penetrated.

The IDF employed several hundred tanks in combat. According to official reports, about ten percent were hit by various threats. Less than half of the hits penetrated. In overall assessment, the potential risk to crewmen would have been much higher, if the tank would be of a conventional design. A colonel commanding an armored brigade, which bore the brunt of battle, mentioned in an interview that during the war that hundreds of antitank missiles were fired on his unit and in total only 18 tanks were seriously damaged. Of those, missiles actually penetrated only five or six vehicles and according to statistics, only two tanks were totally destroyed, however, both by super-heavy IED charges.

Furthermore, tanks are equipped with rapid fire extinguishing system that eliminates sympathetic detonation of ammunition. As result, the risk to crew members is reduced, even when the armor is penetrated. During the fighting, and only few tanks encountered catastrophic fire hazards after being penetrated by anti-tank missile, substantially reducing lethal burn casualties to crew members. Only few hits penetrated the frontal arc, where the tank has the heaviest armor. Realizing this, Hezbollah aimed their missiles to the sides, and rear, when possible. While the flanks were designed to withstand significant threats they are not designed to defeat all threats, but are capable of defusing and reducing the risk to the crew and tank, even when they fail to defeat the threat. Therefore, both frontal and side armor demonstrated very high effectiveness against all threats. One of the major lessons of the war is the importance of an active protection system, which can be used to augment current armor and extend the maximum protection, currently limited to the frontal arc, to the full 360 degree region.

Some of the tanks were equipped with ad-on belly plates to protect against heavy mines and belly charges. Despite the extensive use of these charges by the Hezbollah, since the IDF did not use existing roads and paved new routes to the objectives, only few Merkava tanks and heavy AFVs encountered these charges, some weighing well over a hundred kilogram. While heavily armored vehicles can hardly be expected to survive such an attack, the latest versions of the tank demonstrated effective protection for the crew, which, in some cases, even managed to survive such attack with only minor injuries. In one instance, a Merkava tank was hit by such heavy belly charge, killing one crew member and wounding the remaining six, (some traveling in the rear compartment). Despite the loss of one crew member, this incident is considered proof of the effective protection of the new tank.

To reduce the threat of such “super charges”, heavily armored D-9 bulldozer were employed to pave new routes for the armored vehicles, and precede the tanks over high-risk tracks, causing IEDs to blow up with minimum damage thus clearing the way for the following tanks.
The IDF Armored Corps has traditionally invested considerable effort in examining hit after-battle statistics on its tanks, in order to establish new tactics and techniques. The founder of this procedure was Major General Israel Tal, “Father of the Merkava” and one of the leading tank experts of word-wide recognition. After the 1973 Yom Kippur War General Israel Tal led a development team which took into consideration Israel’s unique battlefield characteristics and lessons learned from previous wars. On General Tal’s orders a special team of experts examined every single tank hit, while still on the battlefield and on the findings an in-depth investigation was made to develop effective means for crew protection, which formed the basis of the unique Merkava project. A similar investigation team has already recorded all hits on tanks received during the Lebanon crisis and a full report was made available for further detailed assessment team of experts which is already examining these reports in detail, in order to make the necessary amendments without delay, pending the resumption of the conflict, should the presently fragile cease fire fall apart.

Tanks were frequently required to support infantry units, with heavy direct fire which exposed them to missile attacks. During the war, Merkava tanks used various types of ammunition, particularly the APAM, anti-personnel/Anti-Material rounds, developed by IMI. These rounds, originally developed for 105mm guns, were used by Merkava 2 tanks.It was used effectively against Hezbollah targets identified in buildings and bunkers. Several hundreds of APAM projectiles were fired during the war. APAM proved to be the most effective anti-personnel and anti-structure weapon available to the combined arms forces, proving its effectiveness at all realistic combat ranges. Merkava 3 and 4s were equipped with 120mm guns, used modified Flechette for similar anti-personnel roles. These rounds 105mm projectiles are fitted with a 120mm sabot to fit the larger barrel. The projectile used all combat ranges. It is filled with 5,000 steel darts, providing the tank an effective open-area AP capability, and has a high kill probability. IMI is expected to complete development and production of a 120mm version of the APAM which will offer more advanced features, compared to the 105mm type.

Additional MEDEVAC modified Merkava tanks were configured early in the conflict and were used to evacuate casualties. The IDF also used artillery fire to protect infantry and armor units exposed to enemy fire, but even the artillery consumed its stocks of smoke ammunition, revealing a serious deficiency in IDF requirements assessment. It took some time, until the units began to work in combined arms teams, an art of war abandoned by the IDF in recent years. This included sending dismounted infantry over suspected high-risk ground and take out enemy positions with close-in fighting, using tanks and attack helicopters to support such operation with direct fire, while using heavy armored D-9 for recovery action under fire.

During the last six years, in which the bulk of the IDF was constantly engaged in low intensity urban counter terrorist warfare in the West Bank and Gaza Strip, all regular forces, including tanks crews were retrained for small unit infantry policing activities, which was mostly dismounted action. This proved extremely painful, when young conscripts, which make up the bulk of the regular IDF were rushed into battle, after hasty retraining. Israeli tankers had to quickly re-adapt old-new procedures during combat.
During the Intifada, the armored corps did not receive top priority among senior defense establishment officials. Short-sighted budget cuts took a heavy toll on armored units. As result, at the beginning of the war, tanks were lacking basic countermeasures such as instantaneous smoke canisters, laser warning detectors and infrared jammers. While some of these devices were urgently supplied later during the war, the damage was already done. Armored Corps officers blamed authorities after the war, expressing their frustration over the defense establishment’s refusal to fund the installation of a rocket defense system on Israeli tanks and claiming that soldiers were paying the price with their lives. The officers were referring, among others, to the Trophy a new and unique, locally developed active protection system that creates a hemispheric protected zone around armored vehicles such as the Merkava 4 tank. If those measures would have been available, Merkava tank crews would have fared a much better survival chance against even third-generation weapons thrown at them.

Summing up the performance of Merkava tanks, especially the latest version Merkava Mk4, most tank crews agree that, in spite of the losses sustained and some major flaws in tactical conduct, the tank proved its mettle in its first high-saturation combat. The overall consensus was that with less well-armored tanks, the toll would have been much higher.