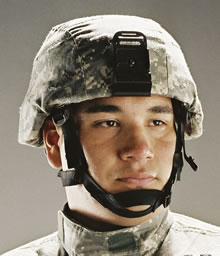 The edges of the new helmet have been cut to improve situational awareness through improved field of vision and hearing. The shell provides ballistic protection. While the ACH has 8 percent less surface area than the Personnel Armor System Ground Troops, or Kevlar, helmet had, most of the material was removed from the front of the ACH, with a smaller amount removed from the sides. Nothing was removed from the back of the helmet. Another improvement currently supplied for conventional helmets are impact absorbing pads, also known as “padded helmet suspension systems“, designed to improve blast protection and protect against other non-ballistic impact. The system includes a set of seven pads, replacing the sling suspension used in earlier helmets. It is now standard in US Army ACH and the latest models of the US Marine Corps Combat Helmet.

Special gear is designed to protect troops from the effect of blast and flash fire associated with IED explosions, fire bomb attack and penetration of the vehicle’s armor by RPGs and other shaped charge munitions (anti-tank missiles etc.) explosion of burning ammunition or other flammable materials (diesel fuel, hydraulic fluids etc.) present a serious risk to the crews of armored vehicles. Risks of skin burns and internal burns can also be caused by chemical materials. They are addressed by special protection gear designed for NBC protection. Each threat is addressed with a specific protective gear such as Balaclava (ski mask), gloves, eyewear and underwear. For example, the new fire resistant ensemble is composed of up to seven separate layers, providing an effective fire resistant tactical outfit that provides effective protection even under extreme cold weather conditions as low as 50 degrees below zero Fahrenheit. The fire-resistant gear included T-shirts of various types; gloves, boots, coverall, jacket and balaclavas. Initial examples of the new gear were sent by PEO Soldier to Korea and Afghanistan for field testing.