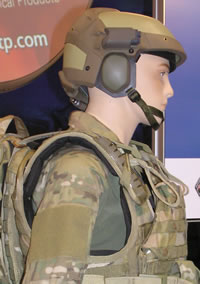 A serious challenge associated with body armor, apart from its excessive weight, is the heat caused by lack of effective perspiration, eliminating the body’s natural ability to dissipate and dispose of metabolic heat. Increasing heat stress exhausts the human body within a short time, even under normal conditions, let alone the extreme heat encountered in the Middle East and Central Asia.

Enabling troops to endure these conditions, cooling vests are worn under the body armor or assault vests, preventing ‘heat overload’ on extended missions. Unlike ‘air conditioners’ that cool an entire space, these personal cooling systems sustain a microclimate just around the human body. Microclimate can be sustained by circulating dry, fresh air, liquid, ice or wax to draw and absorb heat from fighter pilot suites.

Yet, applying these systems for use by infantrymen is more challenging due to strict weight and power constraints. Currently available personal cooling systems are based on one of two principles: body ventilation or heat transfer. Body ventilation systems are designed to circulate air between the body armor and the skin surface, using electrically powered fans. Heat transfer systems are absorbing heat directly from the skin by circulating cool gel through the vest. Both of these methods have their drawbacks – whereas electrical fans are dependent on a power source, Phase Change Material (PCM) like ice or paraffin lose their ability to cool after some time, as they exhaust their potential to absorb heat. Both systems add significant weight (about 4 – 5 pounds in average) to the soldier’s load. A typical cooling vest is the MCCS.

Current personal cooling systems have serious limitations – they are heavy, and cumbersome to wear under the body armor. Most versions have limited duration (less than two hours) and must be ‘recharged’ between missions. New systems, currently in development, are aiming to overcome these limitations, by introducing more efficient microclimate cooling by combining electrical ventilation and phase change methods.

PCM’s are absorbing body heat by acting as ‘heat sink’. The PCM is activated when the temperature rises above a certain level, an activated PCM then absorbs heat as it transitions to a liquid state. After the mission, the PCM is ‘recharged’ by transforming back to a solid or semi-solid state in refrigerators, freezers, or in ice and water. Cooling vests are worn either over a T-shirt or next to the skin.
The material freezes at a temperature of 65 degrees Fahrenheit (F) for optimum cooling. The pack sustains cooling for up to two hours at 100 degrees F. Further enhancement of the PCM concept is applied in the design of cooling underwear, worn under the armor and helmet.

A typical cooling vest, designed by TPI includes a cooling vest circulating cooled water through a specially designed shirt, shorts and a cooling pad for the helmet. These elements are embedded with cooling channels linked to a heat exchanger. The system uses a thermostatically controlled valve to regulate the water flow through the heat exchanger, to establish an optimal operating temperature. The suit uses ‘camelback’ style backpack bladder to contain up to two liters of frozen water and is designed to sustain several hours of operation without coolant replacement.

Another concept is a lightweight ‘spacer vest’, designed to assist the natural cooling through perspiration, which is blocked by the thermal insulation of the body armor. The US Army tested such a system designed to distance the Interceptor Body Armor (IBA) from the wearer’s skin surface, therefore increasing evaporative cooling around the torso. The tests demonstrated an improvement of up to 20% in the evaporative cooling potential when wearing the spacer vest, compared to wearing standard IBA.

The Israeli company Rabintex developed a lightweight cooling system known as Breeze, utilizing a lightweight battery powered ventilation system that reestablishes the natural cooling by perspiration. By feeding fresh air beneath the body armor, the Breeze vest facilitates cooling by wicking moisture from the body and cooling through the natural phase change process. The vest weighs only 0.4 kg (0.9 pounds) and does not require additional coolant. Breeze is worn under most types of body armor vests, and is powered by standard AA batteries. A similar system developed by Global Secure is known as the Body Ventilation System (BVS).

In 2006 over 2,200 systems were shipped to equip troops in Iraq and Kuwait. BVS was designed to be worn underneath the Interceptor Body Armor (IBA). Weighing less than five pounds, BVS uses rechargeable lithium ion batteries to power a blower for up to eight hours.

A more advanced cooling system is under development for the Future Force Warrior (FFW) Program and is expected to mature into a working prototype by mid 2008. This system will support the soldier operating the standard FFW suite as well as the full NBC protected gear. The 3.5 lb system will provide microclimate control by circulating cooling water. FFW project team is also considering the use of spaced personal armor to improve resistance to impact, trauma and improve heat transfer through evaporation and permeability. In the UK, another microclimate suite is currently under development for the British Army and is expected to complete development within two years (2009). This system is designed to weigh around four pounds, provide 100 watts of cooling to operating for four hours. Further improving performance, the US Army Natick Soldier RD&E Center is studying different physiological and technological means to extend the operational endurance and efficiency of future personal cooling systems.

Cooling can also be achieved by applying thermal regulation elements into the body armor. Such a concept is described in a patent registered by John Hopkins University’s Applied Physics Lab (APL). This concept is eliminating entirely the need for a liquid coolant or phase change materials by using high thermal-conductivity channels embedded into the body armor itself. The heat conductors are applied over a moisture wicking layer pulling moisture from the body and dispersing the moisture to the outer surface where it can evaporate.

Farther into the future, warfighters will be ‘tuned’ to maintain peak physical and cognitive performance under stressful and harsh battlefield environment, by increasing tolerance to extreme climates (heat and cold). At DARPA, scientists are studying several concepts, including feeding soldiers with special nutrients and supplements optimized for enduring peak physical stresses, and customizing their vitamin consumption based on each individual’s unique metabolism. The program has recently identified a key bio-molecule that is altered by stress, and may be causative for muscle fatigue following rigorous exercise. Scientists are also studying the principles of thermo-regulation, by controlling the core body temperature by bio-electronic means, thus cooling or warming the body by increasing the levels of heat transfer in certain areas, for example, through the palms and soles.