The British Ministry of Defense (MoD) Future Rapid Effect System (FRES) program office is conducting evaluation trials of three wheeled armored vehicles considered for the FRES Utility Vehicle role. The Boxer, Piranha and VBCI are put through their paces at the Bovington training area as part of trials for a FRES Utility Vehicle Variant (UVV).

Based on these trials the Army will decide on the winning design to be used with the future program. The FRES program will equip the UK Armed Forces with over 3,000 new medium weight armored, air-transportable vehicles configured for reconnaissance, direct fire, and maneuver support roles.

The candidate vehicles are the Boxer, produced by the Dutch-German ARTEC consortium; Piranha, a Mowag design presented by General Dynamics UK; and the VBCI (Véhicule Blindé de Combat d’Infanterie, or “Armoured vehicle for infantry combat”) produced by the French company Nexter. The trials have involved the candidate vehicles being evaluated by technical experts and soldiers. 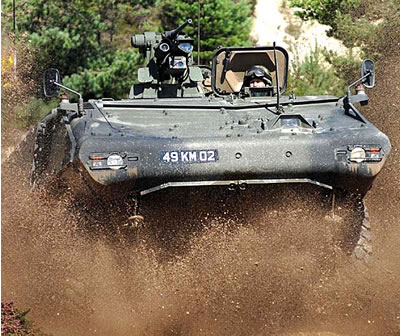