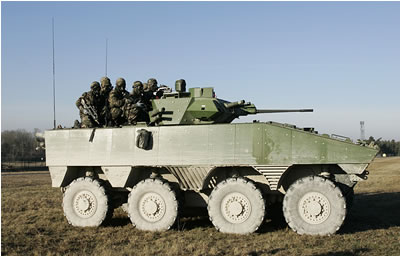 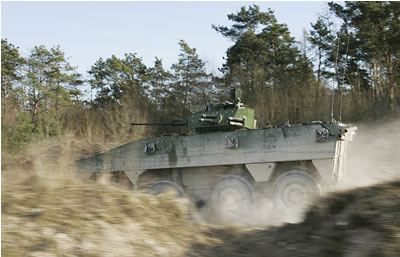 GIAT demonstrated the latest VBCI prototype at Eurosatory 2006. The 8×8 VBCI infantry combat vehicle developed by GIAT will replace the AMX-10P in French Army service and will operate as part of the medium weight force with other wheeled vehicles, such as the VBL and AMX-10RC. The VBCI will equip heavy forces, accompanying the Leclerc tanks. By 2008, GIAT is scheduled to deliver the first batch of 85 vehicles. The complete program calls for the production of 700 vehicles (550 VCIs and 150 VPCs).

Two versions of the vehicle are currently under production – the VCI Infantry Fighting vehicle, equipped with a manned turret with a GIAT 25mm M811dual feed cannon and 7.62mm coaxial machine gun. The VPC will be armed with an FN Herstal Arrows-300 class remote controlled weapon station mounting a 12.7mm machine gun and the SIR regimental information system. Also installed are a gunner’s thermal sight provided by Thales and a panoramic sight for the commander, delivered by Sagem and Galileo. 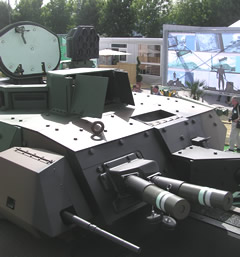 The command vehicle is the second version of VBCI. It is fitted with SIT-V1information consoles, linked to the Army Tactical Information Network and Regimental Battle Management System (BMS) manufactured by EADS and Thales. The vehicle is equipped with an Arrows-300 remote controlled MG turret operated from within the vehicle. A consortium set by GIAT and Renault, which also provides the engines, is producing the first 85 from planned 700 vehicles on order for the French Army. The first five vehicles (four IFVs and one command vehicle)  is undergoing qualification trials since March 2005, the process is scheduled to complete by the end of 2007. Three versions are produced for these trials. In 2004 the VCI Rank infantry carrier was completed and in 2005, the VPC command vehicle and VCI ERYX/Milan anti-tank and mortar vehicle variants. The vehicles are currently undergoing tests in urban and cross country environments. Production will start in 2007 and peak with 100 vehicles per year. The VBCI is equipped with Michelen tires with run-flat systems.

Other versions of the VBCI are also considered by GIAT, including an anti-tank missile carrier, mobile gun system (armed with a 120mm smoothbore gun and autoloader), and a 40mm CTA International cannon, firing the 40mm Case telescope Weapon System which is also considered the weapon of choice for the futuristic EBRC electric-drive wheeled vehicle.

In April 2009 the Spanish engineering company GTD has teamed with the French company Nexter to modify the French VBCI, proposed a future replacement for the BMR-600 currently in service with the Spanish Army. The Spanish Army plans to phase out the 6×6 BMRswith a new 8×8 platform. The BMR was built by Enasa (currently owned by Iveco) since 1979. The vehicle will be designed for a basic gross vehicle weight of 28 tons. It will be able to carry 11 soldiers including the crew. The vehicle has also been offered to Greece, during a visit of a high ranking French delegation in April 2009. 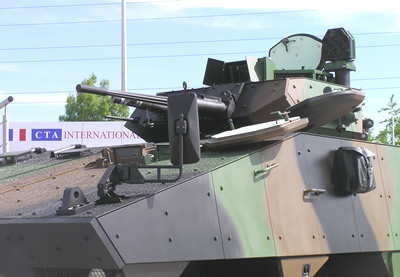 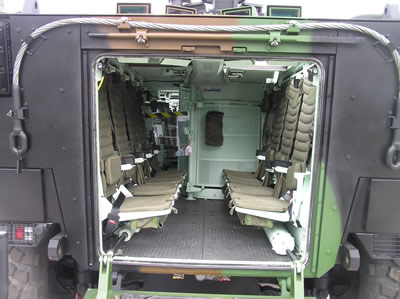 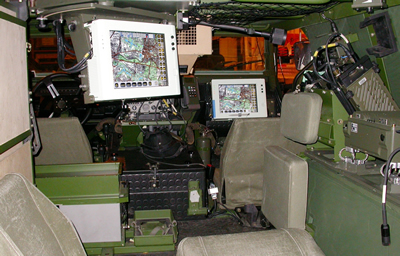