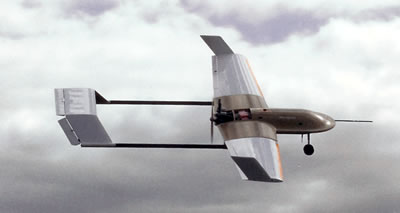 The Sky Spirit platform is built from Kevlar fibers and epoxy matrix composites. The fuselage of the basic model is 112 inch (2.84 m’) long and 122 inch (3.1 m’) for the ER version. The design incorporates a mid-body wing with trailing edge mounted engine. Propulsion is provided by a modified, commercial four stroke 5 HP engine-alternator, delivering more than 500 watts for electrical power. The wing span is 11.5 ft – 3.51 meter span for the Sky Spirit model, and 16 ft – 4.88 m’ for the ER. Empty weight is 35 lbs (15.8 kg) for Sky Spirit and 57 lbs (25.8 kg) for the ER model. Communications and data links antennas are embedded in the winglets, support high data-rate transmissions of up to 20 MB/S over S-Band.

The UAV’s survivability is enhanced by the design of its fuselage for reduced radar cross section. The pusher propeller and tail section contribute to an aerodynamically stable platform that improves the performance of its sensor payload. The vehicle includes retractable landing gear designed for takeoff and landing from unprepared grass strips without special support equipment. The vehicle employs a modular sensor architecture based on “plug and play”. The heart of the Sky Spirit payload is a sensor capability pointing system which supports 360 degrees of continuous motion in azimuth and 82.5 degrees in elevation, allowing a broad area of coverage. The system is operated by a crew of three. Sky Spirit can cruise at airspeed of about 100 ktas, at a maximum altitude of 16,000 ft. above sea level, operating at ranges of 27 – 50 nm for 10 – 22 (ER) hours.