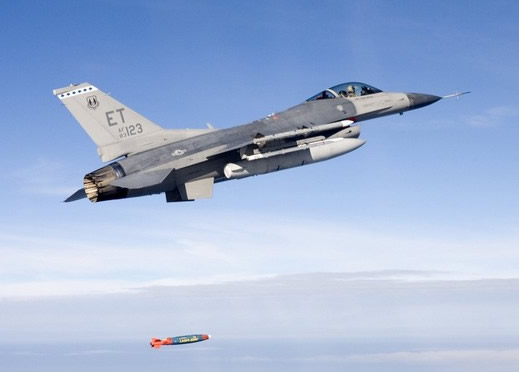 Earlier this month the U.S. Air Force dropped the first 500 lb Laser Guided Joint Directed Attack Munition (LJDAM) on a target in Iraq. Developed by the U.S. Air Force and Boeing, in response to an urgent operational requirement raised early 2007, Guided Bomb Unit 54 (GBU54) completed development and testing in 17 months, and has been fielded aboard 332nd Air Expeditionary Wing aircraft in May. The weapon was dropped from an F-16s from the 77th Expeditionary Fighter Squadron deployed to Joint Base Balad, Iraq against a moving enemy vehicle in Diyala Province, Iraq.

“We have consistently used precision-guided weapons to engage stationary threats with superb combat effects,” said Brig. Gen. Brian Bishop, 332nd AEW commander. “This weapon allows our combat pilots to e
ngage a broad range of moving targets with dramatically increased capabilities and it increases our ability to strike the enemy throughout a much, much broader engagement envelope.”

The weapon uses a combination of GPS and laser guidance to accurately engage and destroy moving targets, utilizing the Precision Laser Guidance Set (PLGS) kit comprising of a laser seeker that acquires and tracks laser signals reflected from the target and a processor that transmits guidance command to the JDAM tailkit. Boeing won the U.S. Air Force contract to modify its JDAM weapon, fielding a laser seeker developed by Elbit Systems, which has already been proven on other aerial guided weapons. The initial $28 million LJDAM contract was awarded to Boeing in May 2007, for the modification of 600 laser seekers to the existing 500-pound JDAM bombs.

Apart from the US Air Force, Germany has also ordered the GBU-54.