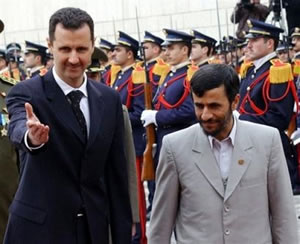 There have been persistent allegations that Syria’s regime wants to create its own nuclear weapons capability. Already in 1991 former U.S. Senator Jesse Helms reported before a Senate committee that there were “credible reports” that “China is engaged in furthering the nuclear weapons ambitions of Syria and Iran”. Helms did not elaborate on these “reports” or their origins. In fact, to the contrary, then CIA director John Deutch testified before the U.S. Senate that “Syria’s nuclear research program is at a rudimentary level and appears to be aimed at peaceful uses at this time”. Sources also emphasized that all Syrian activities were subject to International Atomic Energy Agency (IAEA) safeguards. But the cause for concern among allied intelligence communities rose, when CIA report notes revealed the controversial Russian-Syrian cooperation agreement which became finalized in 1998, still under Hafez Assad’s rule in Damascus. Nuclear intelligence experts then assessed that Syrian efforts to acquire dual-use technologies could be applied to a future secret nuclear weapons program.

Ominous signs foreboded further concern when news trickled out of Syria, that President Bashar al-Asad held secret negotiations with Iran’s Mahmoud Ahmadinejad, to secure Tehran’s assistance for a group of Iraqi nuclear scientists who were sent to Damascus before Operation Iraqi Freedom in 2003. The reports indicated a group of about 12 middle-ranking Iraqi nuclear scientists and their families that were secretly transported to Syria before the collapse of Saddam’s regime. Allegedly, the scientists who brought with them boxes of CDs crammed with research data on Saddam’s nuclear program, were given new identities, including Syrian citizenship papers and falsified birth, education and health certificates. Since then they have been hidden away at a secret Syrian military installation where they have probably been conducting research work for the Syrian military.

New focus on Syria’s nuclear ambitions highlighted earlier this week, when, following the unprecedented security clamp-down in Israel on the mystery-filled air strike over Northern Syria, American media, allegedly reporting on information leaked by unnamed official Washington sources, indicated, for the first time that Israel had “struck at a secret Syrian nuclear installation” and destroyed it. This triggered a flurry of reports, from various sources in the Arab Middle East trying to raise the dense fog which stubbornly persisted among the tight-lipped Israeli and US officials. An interesting report by the Paris based ‘Iran Press Service’ revealed a story claiming that the Israeli attack targeted the village of Tal Abyadh, near Deir az Zohr, 160 Kilometers north of Raqqa, but without indicating the nature of this target area. IPS claimed, though, that Israel completely destroyed a long-range missile base and that Israeli leaders suspected Syria and Iran building nuclear arms with the help of North Korea. Although this report, among others, privy to the so-called Iranian resistance opposition sources must always be taken with a large “pinch of salt”, may have some truth inserted, which should rate further examination.

Defense related cooperation between Syria and North Korea have been known for many years, mainly in the realm of extended Scud missiles. Even between the nation’s leaders relation warmed considerably during the last years.

On February 2002, President Bashar Assad personally conveyed the gift of a special sword to North Korean leader Kim Yong Il. In 2006 Kim Yong Nam, president of the Presidium of the Democratic People’s Republic of Korea (DPRK) Supreme People’s Assembly, met and had a friendly talk with the Syrian government economic delegation.

It has been an open secret, that Damascus has become the main focus of clandestine activities pertaining to weapons of mass destruction smuggling since the American-led coalition forces invaded Saddam Hussein’s Iraq in March 2003. In January 2004, David Kay, former head of the coalition’s hunt for Iraq’s weapons of mass destruction, claimed that part of Saddam Hussein’s secret weapons program was already hidden somewhere in Syria.

Behind these top secret activities seemed to be a former Iraqi air force general, an Assyrian- Christian named Georges Hormiz Sada. On January 24th 2006, Sada announced the publication of a book he had written entitled Saddam’s Secrets: How an Iraqi General Defied And Survived Saddam Hussein, with the tagline “An insider exposes plans to destroy Israel, hide WMDs and control the Arab world.” In his book, Sada claimed that Saddam Hussein ordered to fly portions of the WMD stockpiles to secret locations in Syria. Although Sada’s book included some highly contradictory material, the Post OIF coalition fact-finding mission (ISG) hunting for suspected stockpiles of WMD, ruled that although it was unlikely that an “official” transfer of WMD material from Iraq to Syria took place. However, it also acknowledged that ISG was unable to complete its investigation and was unable to “rule out the possibility that WMD was evacuated to Syria before the war.”

A United Nations briefing indeed determined that Saddam Hussein shipped weapons of mass destruction components as well as medium-range ballistic missiles before, during and after the U.S.-led war against Iraq in 2003. The UN Monitoring, Verification and Inspection Commission briefed the Security Council on new findings that could help trace the whereabouts of Saddam’s missile and WMD program. The briefing even contained satellite photographs demonstrating the speed with which Saddam dismantled his missile and WMD sites before and during the war.

In January 2004, a prominent Syrian journalist named Nizar Nayyouf, known for his challenging reports on the Damascus regime, defected to Europe and published, what he claimed to be Bashar’s top secret hiding places of Saddam’s WMD caches in Syria. According to Nayyouf’s report, the storage is in three locations: Tunnels dug under the town of al-Baida, near Homs, being part of a secret underground factory built by North Korea for Scud Missiles and chemical weapons storage. Another is placed at the Syrian airforce camp at Tal Snan, north of Salamija and the third near the city of Sjinsjar, south of Homs, on the border with Lebanon, where armed air force patrols are in control of a large bunker facility.

As for Syria’s own nuclear program, intelligence sources have indicated that recent progress has finally accelerated efforts which had stalled any progress for years, due to continued financial constraints. In 1988 Syria initiated an ambitious plan to build no less six nuclear power reactors scheduled by the late 1990s capable of producing 6,000MW at a cost of $3.6 billion. Although Belgium, the then Soviet Union and Switzerland were approached for assistance, the plan came to nought as a result of mostly financial, but also technical issues.

Nevertheless, GlobalSecurity reported that in 1991, the Peoples Republic of China reporting to the International Atomic Energy Agency (IAEA) the potential sale of a 30 KW research reactor to Syria. However, the IAEA blocked the sale and Syria subsequently reduced its nuclear activities. Another effort in 1995, became nullified when the US persuaded Argentina into abandoning a proposed sale of a reactor to Syria. Two years later, in 1997, it was reported that the Russian government was interested in selling a nuclear reactor to Syria. Indeed, on 23 February 1998, Syria and Russia signed an agreement on the peaceful use of nuclear energy. In July 1998, the two sides agreed on the time table for the realization of a 25-MW light-water nuclear research center project in Syria with the participation of Russia’s Atomstroyeksport and Nikiet. In addition, Russia and Syria have approved a draft program on cooperation on civil nuclear power. Broader access to Russian expertise could provide opportunities for Syria to expand its indigenous capabilities, should it decide to pursue nuclear weapons. According to a London Financial Times report on January 16, 2003, Russian government sources indicated that Russia is negotiating to build a nuclear power plant in Syria. Syrian officials neither confirmed nor denied this report.

The U.S. National Intelligence Council noted in December 2001that the American intelligence community “remains concerned about Syria’s intentions regarding nuclear weapons”. The report indicated the establishment of nuclear research center at Dayr Al Hajar including a small Chinese-supplied research reactor. Three years later, in 2004 there came intelligence reports alleging that Syria may have acquired centrifuge enrichment technology from the A. Q.Khan network. That same year, an agreement reportedly was signed between Syria and Iran on defense and military cooperation. There are reports that Syria has conducted significant work to examine the feasibility of exploiting phosphatic rock to recover uranium. It is well known that the country is rich in phosphate sediments deposits and produces around one-fifth of the phosphate rock mined in the entire Middle East. According to statistics, in 2001, Syria mined over 2.04 million tons of phosphate. A uranium recovery micro-pilot plant is already operating at Homs. There were also reports that Syria had obtained potential acquisition of enrichment technologies from the notorious A.Q. Khan network. According to one report issued in August 2004, American officials believed that Syria received “an unspecified number” of P1 centrifuge components “in what could be the most significant step” in the country’s “nascent nuclear weapons program.”

Wether Syria will join Iran in its race towards nuclear wepons capability, or limit its activities in peaceful research remains debatable. Will the recent “air show” mystery over northern Syria may decide the issue?