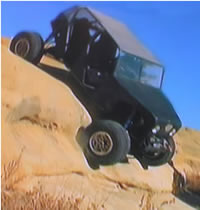 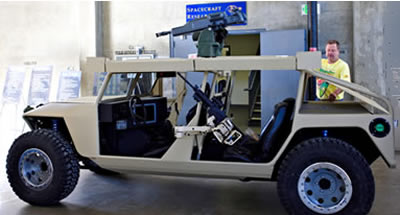 SRATS which stands for “Specialized Reconnaissance Assault and Transport System” evolved from a proof of concept vehicle, utilizing “Rock Crawler” and “Sand Rail” technologies, which are popular with recreational and extreme off-road automotive sports, to produce an off-road vehicle designed to handle extreme terrain conditions. In 2004 DARPA funded the development of two prototype vehicles under a proof of concept demonstration of a small vehicle which would bridge the gap between the soldier and the HMMWV. At AUSA 2007 BAE Systems and the SRATS developer specialty vehicle maker unveiled their cooperation in transforming the militarized rock crawler into serially produced military vehicle, responding to the US Army’s interest in fielding thousand of vehicles to support its light brigades and special forces. The vehicles went through field testing and demonstrations beginning November 2004. The demonstrations simulated reduction of soldier load (backpack) by 80 per cent or more and infantry logistical support going anywhere a soldier can walk or climb. The vehicles demonstrated their capability of handling extreme terrain, traveling over rubble and going through road-less terrain. They were tasked with simulated high-speed convoy escorts, casualty evacuation and insurgent off-road pursuit.

SRATS has a curb weight of 4,700 pounds, fitted with an uprated HMMWV turbo-charged diesel engine, rated at 340 hp running on JP8 fuel. Two vehicles can be carried by a single CH-47 lift. The vehicle accommodates four passengers, with additional six seated on outboard rigs. It can be equipped with an armor package weighing 2,000 pounds, providing efficient protection against 7.62 rifle bullets. The vehicle can be configured with independent front and rear steering, for maximum agility and maneuverability.

The first SRATS were completed last year (2006) as ‘proof of principle’ vehicles for the US Defense Advanced Research Projects Agency (DARPA), creating much interest among special forces. The military was ready to order over 100 of them, but then interest expanded beyond the special forces, and the Army’s Rapid Equipping Force (REF) is now interested in producing thousands of these vehicles. This potential motivated the SRATS developer to approach BAE Systems to team for the development and production of a new armored version.

The armored SRATS is designed to bridge the gap between the current HMMWV and the dismounted soldier, providing support and logistics for small infantry elements, negotiate on and off-road convoy escort and mobility, carry out stealth recce missions, extract high value assets from difficult locations and conduct fast pursuit off and on-road. SRATS has a length of 175″ (4.445 m’) and wheel base of 132″ (3.352 m’), the vehicle curb weight is about 6,500 lbs (2.948 t.) for the unarmored version and 8,500 lbs (3.856 t.) for the armored vehicle, fitted with small-arms protection (7.62mm) and runflat tires. In both configurations, SRATS can carry a payload of 4,000 lbs (1.814 t.) including four passengers. The vehicle is powered by AM General 6.5 V8 turbo diesel engine rated at 300 hp and 505 lb/ft torque. It uses standard fuel tanks to sustain operation at a range of 375 miles (60- km) or accommodate larger fuel tanks for extended range.