The U.S. Navy officially accepted delivery of the future USS Independence (LCS 2) Dec. 18, 2009 at the Austal shipyard in Mobile, Alabama. The ship will be commissioned on January 16 and is expected to be ready for ‘Sail Away’ status by February 2010.

Prior to delivery, the Navy’s Board of Inspection and Survey (INSURV) conducted Acceptance Trials aboard LCS 2 on Nov. 13-19, and found the ship’s propulsion plant, sea-keeping and self-defense performance to be “commendable,” and recommended that the chief of naval operations authorize delivery of the ship following the correction or waiver of cited material deficiencies.

Before the Navy inspection the second Littoral Combat Ship (LCS 2) Independence successfully completed the builder’s sea trials test series following a series of demonstrations performed while cruising in the Gulf of Mexico at moderate and high sea state conditions. These trials were testing the ship and all of its systems in preparation for final inspection by the Navy before delivery.

The Littoral Combat Ship is a key element of the Navy’s plan to address asymmetric threats of the twenty-first century. Intended to operate in coastal areas of the globe, the ship will be fast, highly maneuverable and geared to supporting mine detection/elimination, anti-submarine warfare and anti-surface warfare, particularly against small surface craft.

The new 127 meter long Independence Class LCS will provide a platform for intelligence gathering, employ surface (anti-ship) and land attacks precision weapons, and operate manned and unmanned aerial and surface vehicles (UAV/USV). To further adapt for specific missions, LCS will incorporate a modular and interchangeable approach, enabling it to be reconfigured to specific missions such as antisubmarine warfare, mine warfare, or surface warfare missions on an as-needed basis. The LCS will be able to swap out mission packages pier-side in a matter of hours, adapting as the tactical situation demands. These ships will also feature advanced networking capability to share tactical information with other Navy aircraft, ships, submarines and joint units.

The Independence Class LCS, built by General Dynamics is designed to offer the largest usable payload volumes per ton of ship displacement of any U.S. Navy surface combatant afloat today — providing the flexibility to carry out one mission while a separate mission module is in reserve. Its large flight deck sits high above the water, sized to support near-simultaneous operation of two SH-60 helicopters or multiple unmanned vehicles. In addition, the deck is suitable for landing the much-larger H-53 helicopters, should that become a future requirement.

The stable trimaran hull allows for flight operations in high sea conditions. The design is based on a proven Austal (Henderson, Australia) high-speed trimaran hull that is currently operating at sea. 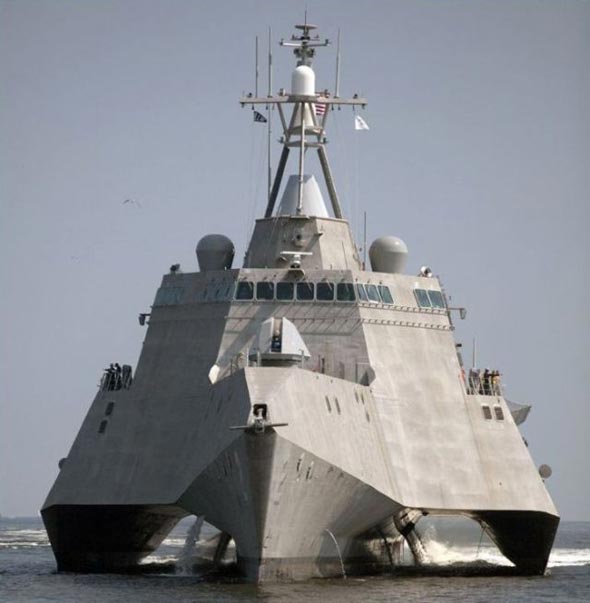 Independence LCS-2 Demonstrates its Performance during Sea Trials
The second Littoral Combat Ship (LCS 2) Independence successfully completed the builder’s sea trials test series following a series of demonstrations performed while cruising in the Gulf of Mexico at moderate and high sea state conditions. These trials were testing the ship and all of its systems in preparation for final inspection by the Navy before delivery. Despite the weather, the ship repeatedly reached speeds of over 45 knots with propulsion and ride-control systems operating in full automatic mode, proving the effectiveness of the control systems and the highly efficient and stable characteristics of the trimaran hull form. Sustained high speed performance was part of the Navy’s requirements and the Independence demonstrated that sailing at a speed of 44 knots during the required four-hour full-power run, peaking at 45 kt maximum speed.

Another important element being demonstrated during these trials was the Open Architecture Computing Infrastructure (OPEN CI) – a highly flexible information-technology backbone that integrates the ship’s combat, damage control, engineering control, mission package and other onboard computing functions, also proved its effectiveness during the trials. This architecture enables the crew to operate consoles and workstations anywhere on the vessel. If required, the entire bridge area can be reconfigured to meet specific mission requirement, support distributed operations on board or reconfigured to recover from combat damage. OPEN CI design, developed and integrated by a General Dynamics Advanced Information Systems team, allows “plug and play” integration of both the core systems and the LCS mission modules. It meets Navy open architecture requirements, strictly adheres to published industry standards and facilitates the integration of commercially available products.

The Littoral Combat Ship is a major part of the Navy’s plan to address asymmetric threats in the 21st century. Intended to operate in coastal areas, the ships will be fast, highly maneuverable and equipped to support mine detection/elimination, anti-submarine warfare and anti-surface warfare mission. 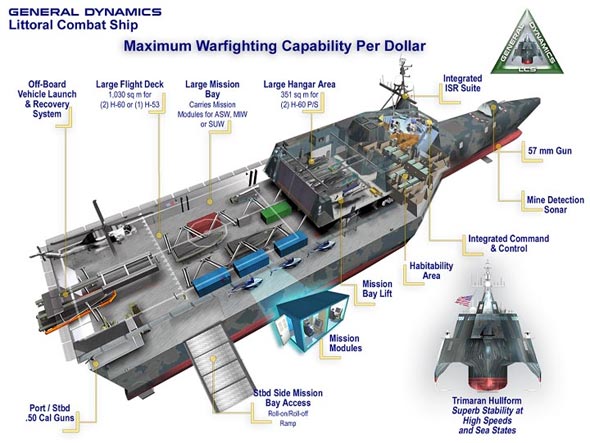